Moorcock is the king of modern British sci fi. He has been writing at a stupendous rate for more than fifty years and there are more than a hundred books. This, from the late Sixties and Moorcock's late twenties, is one of very few stand alone works. A version - a novella version - of Behold the Man won the Nebula award (best novella 1967). The thing about Moorcock is, he constantly reworks, rewrites and expands. There are multiple versions of various stories, just as there are multiple universes in some of his fiction. 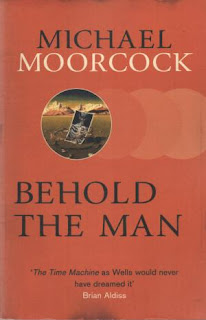 This, it might be said, is Moorcock's distinctive take on H G Wells' The Time Machine. Wells, being Wells, was only really interested in the future. The time machine here, we are told as soon as our hero sees it, cannot go forward, only back. And if we can only go back - subject to the usual caveat of not  changing history - where would most of us choose to go? Elizabethan England perhaps? The age of the dinosaurs? The Holy Land circa 30AD? As might be guessed from the title, our hero Karl Glogauer opts for the latter.

His life in Sixties London, which is recreated throughout the novel, has led him to question his religious beliefs. So when the physicist Sir James Headington shows him his time machine and invites him to use it, Karl has only one destination in mind.

Virtually the first person he encounters in Roman Palestine is John the Baptist. Fortunately Glogauer has taught himself Aramaic, unfortunately John doesn't seem to have heard of his supposed cousin, Jesus of Nazareth. Yet the time is right - 28AD. Jesus should be mustering disciples and spreading the Word. His ministry won't last long and, critically, John has to die first.

Thus begins Karl's quest for the as yet unknown Nazarene. I won't reveal how it pans out but will just state that it does so in a highly satisfactory manner.

This is the first full-length Moorcock I have tackled. I was put off about the time he was writing the original version of Behold the Man, by a ridiculous piece of fluff he wrote for an alternative magazine of Swinging London. I enjoyed this hugely. I loved the nonstop tide of ideas, the clever way he play with the various levels of narrative and the distinctive tone he gives to each.  Glogauer is an amiable hero, not quite an everyman, more an everyday avatar of the polymathic Moorcock. I have already ordered another Moorcock - one which isn't listed among the hundred or so in this series from Gollancz but which Moorcock himself mentions in his introduction - called Mother London. I am definitely keen to read his take on Elizabeth I, Gloriana, though I am slightly worried that has something to do with the off-putting bilge I read on the train home from London circa 1968-9. We'll see.
Posted by rogerwood at 15:33