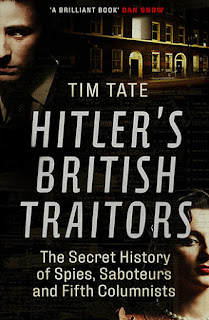 The Secret History of Spies, Saboteurs and Fifth Columnists - so says the sub-title, and that is exactly what we get, to an extent I have never come across in what is now forty years of sporadic research on the subject. Never before have I seen it spelled out just how dangerous the relevant Duke of Bedford was. Never before has it been made so absolutely clear that only ordinary people paid any meaningful price for their treachery. The rich, the landed, those with friends in high places, simply went through the motions of punishment.

In some ways I wish Tate had included a critique on the trial and hanging of William Joyce, Lord Haw-Haw. But I understand entirely why he didn't. Joyce wasn't ever a British citizen. He could not be a traitor to a country he never owed allegiance too, and his trial was a legal nonsense with lethal outcomes.

Tate is very good on the case of Sir Barry Domvile, the former head of naval intelligence, who may well have been the greatest Nazi danger to the UK. I have read Domvile's account and that of Sir Archibald Maule-Ramsay, the MP who formed the Right Club to keep British Nazism going after other Fascist groups closed down on the declaration of war. Ramsay was mad - even by the aristocratic standards of his day, obviously deranged - whereas Domvile was evil. Both were interned under Section 18b of the Defence Regulations. Neither was stripped of rank or title. The Duke of Bedford, who was prepared to finance and Nazi coup in Britain, wasn't even interned.

A scorching read, thoroughly recommended.
Posted by rogerwood at 15:02 No comments: 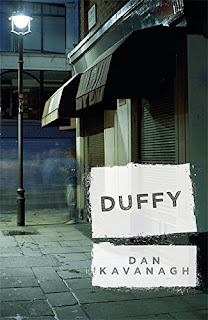 Duffy is the first of four detective novels written in the early Eighties by Julian Barnes under the Kavanagh pseudonym. You soon realise why the literary Barnes went pseudonymous. Duffy is a bisexual ex-copper, dismissed over allegations of paedophilia, and his manor, then and now, is Soho, which in 1980 was still the only reliable source of prostitutes, dirty films, mucky mags and live sex shows for London visitors.

Duffy has set up his own security advice business. He gets a call from a bloke called McKechnie, who imports jokes and novelties. McKechnie is being extorted over an affair with his secretary. Duffy investigates - and finds himself embroiled in a gangland power-grab which ends up with him in a very delicate situation with a cheese-cutter.

The novel is smart, funny and brilliantly written - a microcosm of its time and place.
Posted by rogerwood at 12:48 No comments:

Medieval Writers and their work - J A Burrow 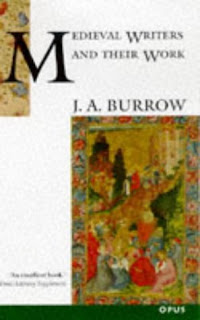 This is an introduction for students to Middle English literature, which Burrow defines as 1100 to 1500. I think he stretches the period somewhat and would argue that England and Scotland had caught up with the Renaissance well before 1500. However, Burrow's survey of the field in Chapter One is invaluable. It introduced me to several figures I did not know and reminded me of others I haven't looked into deeply enough.After that, I'm afraid, I didn't like Burrow's methodology overmuch. Writers, audiences and readers - fair enough, it made the point that many people, possibly most, received these texts as performance, but we know virtually nothing of readers or writers. Personally, I always tend to the belief that more people could read than we are led to believe. Ignorance was a policy of the Restored Monarchy and its government after 1660. Major Genres was a fashionable way of categorising literature in the Eighties when this book was written, but again, what evidence is there that writers thought of their work that way? Modes of meaning - sorry; it meant nothing whatever to me.

Overall, then, this is a book to get you arguing, which is always a good thing. My major criticism, however, is that Burrow spends far too much time on Chaucer. Chaucer is too near the end of Middle English to be a driving force. He had the benefit of being John of Gaunt's brother-in-law, which was almost as cast-iron a guarantee of publication in Caxton's time as a public school education is today. Chaucer is loved for the Miller's Tale and the Wife of Bath. No one gives much of a toss about the rest. For true Middle English, and true independence of thought, Burrows should have allotted at least as much space to the anonymous author of Sir Gawain and the Green Knight. But he was probably from Lancashire or even further north and was never going to get published before the Nineteenth Century.
Posted by rogerwood at 16:20 No comments:

Jack Grimwood is one of several up-and-coming British spy writers. I have reviewed several of Charles Cumming's novels on this blog and rate him second only to the master, John le Carre. Jack Grimwood isn't quite that good but he is not far off. 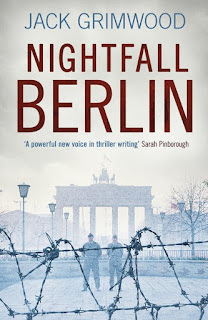 Grimwood is happy to acknowledge his debt to the master, and does so in the book. His continuing character, Tom Fox, is a brilliant character - a former priest turned undercover assassin for British Intelligence. The setting is the 1980s, with the Iron Curtain starting to rust. Mrs Thatcher is halfway through her reign of terror and Fox's father-in-law is one of her ministers. It is five years or so since Sir Anthony Blunt was unmasked as a traitor. More recently, Peter Wright's Spycatcher claimed there were more Soviet agents in Parliament and the Security Services.

Nightfall Berlin sends Fox into East Berlin to bring home the ageing defector Sir Cecil Blackburn. Everything is arranged but when Fox calls to collect Blackburn for the final time, he finds the old boy with a crowbar through his chest and his minder, who just happens to be the nephew of the KGB Rezident in Berlin, strangled beside him. Everyone, including Blackburn's girlfriend and his daughter, believes Fox killed them. Worse, back in England, someone abducts Fox's young son and demands Blackburn's memoirs as ransom. Fox doesn't have the memoirs. The papers were burnt in the old man's fireplace.

It's a cracking read. Grimwood is another who has realised the importance of thrills in thrillers. And the final shootout in the Berlin zoo is a whiteknuckle ride. This second in the series is highly recommended. I, meantime, will set about finding the first, Moskova. 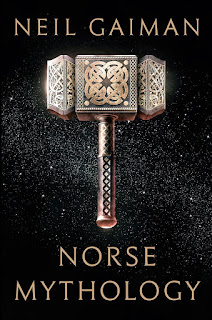 Norse Mythology has been very successful and it's easy to see why. Everybody has a glimmering about Asgard, and Valkeries, most of us either from Marvel's Thor comics or the movies, and Gaiman admits he is no different. What he has done here is dig out the originals, make a personal selection, and retold them in his unique personal style. Because it is Gaiman, his choice is idiosyncratic. He has chosen to go down side-alleys not normally followed. I'm thinking particularly of 'The Apples of Immortality' and 'The Mead of the Poets,' and especially the amount of coverage given to supporting characters like Frey and his sister Freya.

Because it is through-written, the characters remain constant - the thick-headed Thor, Loki with his scarred lips, and Loki's daughter Hel, with half of her beautiful, the other half dead. And Gaiman tackles the whole Edda, from the dawn of creation to Ragnarok and rebirth. Personally, I loved it.
Posted by rogerwood at 15:24 No comments:

"In Hollywood, no one is innocent." So runs the blurb. But in Hollywood, in 1939, no one called the movies 'pictures.' Yes, it's quite a clever pun pointing to the solution of the mystery, but if it's that good, and that important, Bolton should have set the novel in the British film industry. 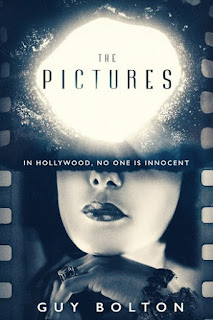 Title apart, it's an impressive fiction debut. Jonathan Craine is an LAPD detective who has a special relationship with MGM.  He was married to one of their lesser stars until she committed suicide. Now he's back after compassionate leave and finds himself summoned to another movie suicide - a producer married to another MGM star whose latest movie is about to hit the screens. I instantly thought Jean Harlow, especially when the fictional studio puts out the same 'closet homosexual' cover story the real MGM used when Harlow's husband Paul Bern shot himself in 1932. Fortunately, The Pictures is not a version of the Harlow story - nor, unfortunately, is the bereaved star Gale Goodwin remotely like Jean Harlow. Instead, it's mainly the story of a studio on the verge of collapse that has staked everything on the upcoming Wizard of Oz and will do absolutely anything to maintain it's family-friendly image.

Craine is an excellent protagonist, conflicted in so many ways but always fundamentally straight. His second-in-command,Patrick O'Neill, starts off annoying but ends up a hero. Gale Goodwin is also well drawn, as are all the Hollywood bigwigs. I would have liked a cameo or two from other movie stars of the period to flesh out the illusion of actuality, but I don't want to nitpick. The plot is cunning, and The Pictures has that often overlooked element in modern thrillers, that is to say genuine thrills. There is a car chase through the Hollywood Hills that had me spellbound and a shootout at the station very nearly as good. Guy Bolton is definitely a name to look out for.
Posted by rogerwood at 15:58 No comments:

Gray died last week, aged 85. It occurred to me I have never read his fiction, so I got hold of this 1985 novella. It's about a prim Scottish nobody who runs away to London, beginning an unlikely rise to great fame and an inevitable fall. It's a modern parable about the thirst for fame, the transitory nature of fame, and the monsters that crave it. 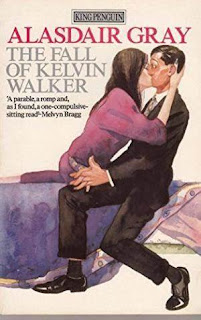 Kelvin Walker does not start off a monster. He's the oppressed youngest son of a Scottish Wee Free grocer. He has no experience, no qualifications, yet believes himself  capable of achieving great things. So he turns up in Swinging London in his plus fours and Hitler haircut and blags his way into the BBC. He is so counter-cultural that he attracts a cult following on TV, and live on TV he is brought down.

Gray's views on the BBC are made plain. His writing is punchy and funny. I shall investigate further. 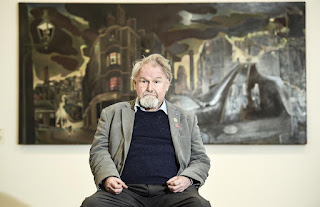 Posted by rogerwood at 15:04 No comments: