The Encyclopedia of the Dead - Danilo Kis

Danilo Kis (1935-1989) was a Yugoslavian expat, living and working in France. He wrote some novels but is perhaps better remembered for his short stories (or pocket-sized novels, as he called them) of which this, from 1983, was his final collection. 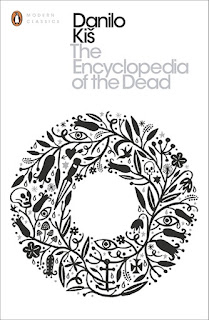 Kis's style deliberately reminds us of Borges but I also found links with Umberto Eco (whose Prague Cemetary is strongly reminiscent of Kis's 'The Book of King and Fools') and Isak Dinesen (very much so in an off-beam love story like 'Last Respects'). He is elusive and goes to considerable lengths to disguise fiction as fact. The key story here is presumably 'The Encylcopedia of the Dead' itself, which is what it says it is - a woman looks up her father in the huge encyclopedia of everyone who has not been recorded elsewhere. Actually I wanted the story to go further - so that should you ever be mentioned in any other written record (such as a short story or a memoir) you are automatically deleted from the encyclopedia of unknowns. Perhaps that is easier to envisage in the age of the internet. Kis's story is an uncomfortable reminder how far archival records have come in just 35 years. I liked 'The Book of Kings and Fools' even more, largely because  I had read and enjoyed Prague Cemetery so recently.


My favourite over all, though, is 'Simon Magus', the gnostic story of the rival messiah who fell spectacularly foul of Christ's disciples. This is exactly the sort of story I love to read and write.


I am not the biggest fan of introductions. Here, however, the introduction is by Mark Thompson, who is Kis's biographer, and I feel the stories would have been harder to get into without it.
Posted by rogerwood at 15:34