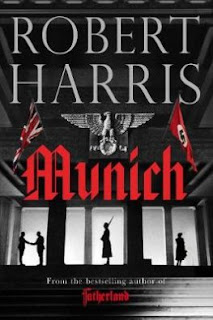 The blurb on the back, from The Times, describes Harris as "Master of the intelligent thriller". You can't argue with that. In three successive standalone novels - An Officer and a Spy, Conclave and now Munich - he takes storylines you already know the end of (or don't care in the case of Conclave) - and somehow, inexplicably, makes them exciting. I say 'inexplicable' but it must be possible to work out how he does it. I must take the time, sometime.


Here, obviously, this is the Munich Crisis of 1938. We all know how that turned out. Chamberlain waving his bit of paper at Croydon airport; 'Peace in our time. Part of how Harris makes this work so well is his unexpected sympathy for Chamberlain, until David Cameron came along, surely the most despised British Prime Minister of the media age. Harris, we recall, did a variant of this in The Ghost, wherein his unforeseen contempt for the clone of his old friend Tony Blair was the only saving grace of (for me) an execrable book. The other device that works very well in Munich is the use of two protagonists, Hugh Legat and Paul Hartmann, former Oxford friends who now attend the last-minute 'peace' conference as rising stars of the their respective civil services. How they will come out of it, particularly Paul who is most at risk, provides both the tension and a breathtaking twist right at the end which I for one never saw coming.


Thus a great deal of artistry goes into the construction of Harris's story which hides comfortably behind his seemingly effortless and efficient prose. The Times is right. There's only one word for Munich, that's masterly.
Posted by rogerwood at 16:03