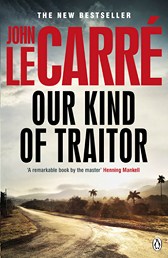 Back in the 80s I read all the le Carre novels I could get my hands on.  Little Drummer Girl was the one that dampened my enthusiasm (can't remember why) and the dreary movie adaptations (Constant Gardener, for example) don't help.  But I read this and realised why I had liked him so much.

Le Carre is not an easy writer.  You have to work to discover the beauty of his style.  But once you've got the taste you can't resist consuming more.  Our Kind of Traitor is not a great novel - for me, it was hard to care about the young couple who are supposedly our protagonists, and I knew well before halfway how it was going to end.  Nevertheless, the Russian anti-hero and his mad wife are truly memorable characters; the professional spies are spellbinding.  This is because the Russians and the spies all have deep, complex back stories, whereas Perry and Gail are just a little too good to ring true.

I'm going to look out for more of le Carre's recent work.  His official website is here.
Posted by rogerwood at 16:02 No comments: 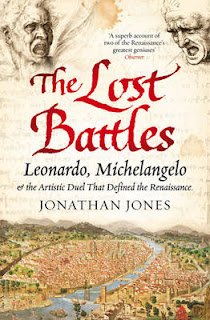 An interesting book in many ways, this nevertheless hinges on the flimsiest of premises - a supposed competion between Leonardo and Michelangelo which never really happened and concerning which no completely reliable evidence remains.

Jones writes beautifully and it is in the digressions he is compelled to make to pad out the narrative that he excels.  Personally I was much taken with the considerable information he supplies about Piero di Cosimo, a resolutely barmy artist I stumbled across last year and who fascinates me.  Unfortunately, Piero had very little to do with Leonardo or Michelangelo (he was notoriously misanthropic) and absolutely nothing to do with their work in the Great Council Hall at Florence.

In the first decade of the 16th century, during a rare Medici-free republican interlude, the local art superstars were commissioned to paint huge patriotic paintings on the long walls of the chamber.  Neither was completed, hardly any actual painting took place, and Jones cannot come up with a single day on which the supposed antagonists were present in the building at the same time.  The cartoons (full-scale preliminary drawings) which were completed were impounded by the Medicis when they returned from their enforced holiday and gradually disappeared over the centuries, only surviving in the drawings of other, much later hands.

The other problem Jones has is that he clearly cares much more about Leonardo.  What should be a clever way of bringing together two Vasari-esque 'lives' of the Renaissance greats is in fact two-thirds about the one who achieved the least.  I am interested in Leonardo but am much more interested in Michelangelo, who at least knew how to stick paint on a wall and keep it there, and in the end I am most interested in the bit-part players of the period like Piero and Uccello (who also gets a lengthy mention, even though he died, at a great age, thirty years before the Great Hall commissions).
Posted by rogerwood at 18:03 No comments: 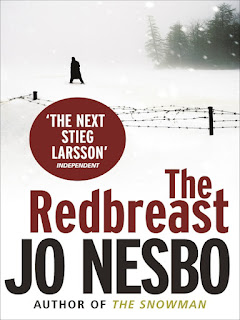 One of the earlier Harry Hole thrillers, The Redbreast is great fun to read but a tad disappointing in the denouement.  I understand the attraction of rooting the crime in Norway's bipolar wartime experience but the war element of the two-strand narrative collapses to pretty much nothing once you know the twist.  Unlike Headhunters, it is a bit of a cheat.  Even so, you have to read Redbreast to fully understand The Snowman, The Leopard etc.
Posted by rogerwood at 12:08 No comments:

A Plague of Heretics - Bernard Knight

The fourteenth in the Crowner John series, and Knight is on top form - straight into the action, plague on page 5, heretic on page 8.  The mystery covers both strands and I didn't get the culprit until Knight intended me to.

What I like about Knight, more than his fellow Medieval Murderers, is that his characters have such rich personal lives outside the mystery.  There are as many twists in the character development as there are in the murder, and I certainly didn't see the big twist in Chapter Sixteen coming.  It takes a confident author to pull a stroke like that, and yet I can't wait to see how it plays out in the next instalment.

If there is to be a next instalment, that is...  Knight normally knocks out a Crowner John on an annual basis but Plague of Heretics was published in 2010.  Since then he has been launching a new series, the Wye Valley series, which is only midly historical, being set in 1955.

Apparently, Knight is working on a Crowner John prequel.  Hm...
Posted by rogerwood at 16:55 No comments: 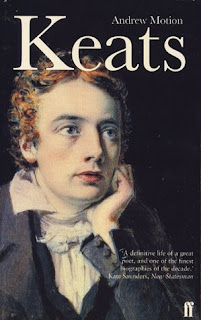 I never felt completely at ease with this book, largely because Motion seems unclear what he set out to achieve.  On the one hand it is a biography, hugely detailed, but bringing nothing new to the table as far as I can see.

For students of our generation - Motion's and mine - Robert Gittings wrote the definitive life in 1969.  Doubtless there was more to be discovered by subsequent biographers but Motion seems content to amplify Gittings rather than add to his findings.  For example, he accepts without question Gittings' conclusion that Keats had venereal disease.  But we have to put the biographer and well as his subject into context.  Gittings popularised Keats for the hippie generation - a generation that considered the pursuit of sex for its own sake a good thing, the inevitable consequences no shame.  But Gittings made the fatal mistake of assuming that just because mercury began to be prescribed for syphillis around Keats' time that it was only used for that purpose.  In fact it was previously used for consumption, which Keats knew he had, and no doubt continued to be so used for some time to come.  Many people today know that Interferon will mitigate the symptoms of multiple sclerosis - but try getting your GP to prescribe it.

Motion interpolates into the life extensive discussion of the poems.  Here is a sphere in which the former laureate clearly speaks with insight and authority.  His conclusions never vary radically from the consensus but then Motion is not a radical poet.  Is this book then a critical biography?  I don't think it is, because if you are going to do that you have at some point to weigh up the opinions of others.

All in all, perhaps the problem here is that the book is simply too big (578 pages plus notes) for such a short and, frankly, well known life.  And that hideously mawkish Joseph Severn portrait on the cover doesn't help.  Severn, like Gittings a century later, made something of a cottage industry out of the Romantic poet who suffered a romantic death.  On a positive note, I have been encouraged to revisit the poems, and that's no bad thing.
Posted by rogerwood at 17:46 No comments: 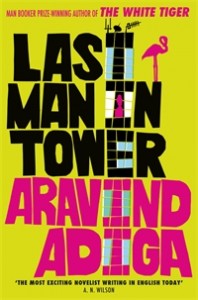 I loved White Tiger, which opened me up to the wonderful world of contemporary English-language fiction from the sub-continent.  I adored Between the Assassinations.  Last Man in Tower brings the contrasting worlds of the first two books into conflict - the chimera of modern, corrupt, entrepreneurial India versus traditional post-Imperial India with its mix of faith and lifestyle.  As one character, who might be about to do something terrible, puts it: "Real-estate speculation was destroying Bombay." [p. 375]

Adiga's writing is at its finest when he finds beauty in the irredeemably unlovely.  As here: "This fence was supposed to mark the land's end, but a promontory of debris, broken chunks of old buildings, granite, plastic, and Pepsi Cola had sneaked past it - the entreprising garbage pushed several feet into water.  Shah's fingers pulsed as he gazed at the amphibian earth of Nairman Point.  Look; how this city never stops growing: rubble. shit, plants, mulch, left to themselves, start slurping up sea, edging towards the other end of the bay like a snake's tongue, hissing through salt water, there is more land here, more land."

PS: Has anyone else noticed how many book blurbs nowadays quote A N Wilson?  The quote tends, as here, to be along the lines of "most exciting novelist writing in the English language today."  Odd.  I always got the impression that in the learned opinion of A N Wilson, A N Wilson was the most exciting novelist writing in any language today or any other day.
Posted by rogerwood at 15:13 No comments: