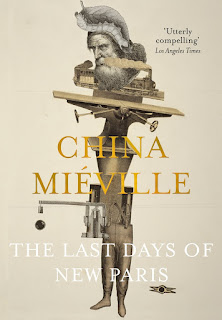 The Last Days of New Paris is a novella, and better for it. The other Mieville novel I have read (Kraken, which I reviewed here last year) went on just that bit too long. Here, the ideas are fizzing throughout but the tighter narrative seems to help Mieville maintain the high standard of his prose.


The idea itself is a corker. Surrealist concepts are brought to life in Nazi-occupied Paris. As a result Paris is still occupied - indeed, cordoned off from the rest of the world, with the rest of the world's blessing - in 1950. These manifestations ('manifs') are predominantly on the side of the resistance (specifically the Surrealist resistance, the Main a plume) of which our hero Thibaut is a member. Thibaut wears one manif, the armour of Surrealist women's pyjamas, and joins forces with another, the Exquisite Corpse (featured on the cover) dreamt up by Breton, Lamba and Tanguy. The Nazis created the manifs with the S (for Surrealist) bomb, the creation of which in 1941 is the secondary storyline here, but the manifs naturally hate them for it. The Nazis have therefore done a deal with Hell and signed up hellish demonic monsters. Also involved is Sam, an American woman photographer, who may or may not be with the OSS, forerunner of the CIA. She is collecting photographs for a book called - typically Mieville - The Last Days of New Paris.


I enjoyed this hugely. It is precisely my cup of tea, right down to the account of how Mieville came by the story and the learned notes at the end. Just reading it inspired me. Hopefully it will do the same for you - because you have to read it.
Posted by rogerwood at 15:42