The Wolves of London - Mark Morris 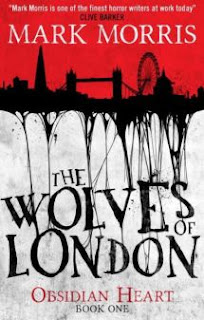 I had not come across Mark Morris before spotting this, the first part of his Obsidian Heart trilogy, in my local library.  I am already on the lookout for more.

Wolves is a horror/fantasy adventure with the added bonus (so often missed) of an engaging protagonist, Alex Locke, goalbird turned psychology lecturer, with something worthwhile at risk - he wanders from the straight and narrow because his eldest daughter's boyfriend is in bother, and gets stuck there when his younger daughter is kidnapped.  The writing style is lively but nowhere near so lively as Morris's imagination.  The surprises and twists keep on coming and kept me entertained to the very end.

Being a trilogy, the end is not conclusive and I admit I would have preferred some loose ends to be resolved.  I expect I shall just have to pick up Book Two, The Society of Blood, to satisfy my curiosity,

By the way, the artwork on the cover, by Amazing15.com, is just superb.
Posted by rogerwood at 15:24 No comments:

OK, not the best idea to read book three of a magnum opus with no knowledge of the first two.  But there we are.  This is what I did - and it didn't matter.  Murakami's dystopian world is so similar to the 'real' world as it was in Japan in 1984 that it makes no difference. His big concept is self-explanatory and does not subsume the three main characters, Aomame, Tengo and Ushikawa,  Aomame has crossed into this world and killed the Leader of the Sakigake sect.  She is being hidden by the Dowager but it obsessed with finding Tengo, briefly a schoolmate twenty years ago.  Tengo is a part-time teacher who has ghost-written the sensational bestseller Air Chrysalis for the teenaged prodigy Fuka-Eri, real name Eriko Fukada.  Air Chrysalis is ostensibly science fiction but actually it is an expose of the Sakigake cult.  In this world - which no one has noticed is different, even though the main difference is two moons - the air chrysalis and the Little People who make them are real.  Ushikawa is the profoundly ugly investigator who has been hired by Sakigake to track down Aomame.  He goes to great lengths because he feels responsible, as he was the one who vetted her when she started work for the cult.  Unable to breach the Dowager's elaborate security he decides to track down Tengo instead.

It is an intriguing book, which keeps rumbling on in the mind long after you've put it down.  The Little People, when they appear, are jaw-dropping.  Who is the unseen fee-collector for the national TV service who keeps banging on people's doors - even when they haven't got TVs?  What is his relationship to Tengo's comatose father?  What difference does the smaller, greenish moon make and why has nobody noticed?

Murakami's cool, understated prose makes the bizarre instantly acceptable - and, when the truly bizarre things happen, gives them double the impact.  By focusing on the three main viewpoint characters, and giving them each a chapter in turn, he builds an appreciation of their personalities by sheer accumulation.  Their linking characteristic is a patient stoicism - it doesn't matter how long Ushikawa has to stake out Tengo's apartment; Aomame cannot and will not leave Tokyo for a safer location until she has found Tengo, even though she has no reason to believe he has thought about her since they were ten years old; and Tengo is content to sit by the bedside of the father for whom he has no feelings whatsoever, using his spare time to plod away at his novel.

Superb.  I will be happy to read the other two books (published in a single volume in the UK) but what really appeals to me is Murakami's earlier international successes, Norwegian Wood and Kafka on the Shore.
Posted by rogerwood at 17:28 No comments:

Beatrice and Her Son - Arthur Schnitzler 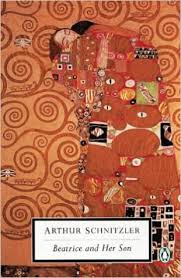 Schnitzler was the Viennese novelist of the Freudian era.  Beatrice and Her Son is one of his mature works, published just a year before World War One.  It is is very short (three chapters and less than 100 pages) but very dense and ultimately quite shocking.  Beatrice is the widow of a celebrated actor.  She is probably not yet forty (Schnitzler is far too subtle to specify) and reasonably well off.  Some respectable but slightly dull men of around her own age are showing an interest, now that her mourning period can be considered to be decently done.  But on her summer holiday in the mountains with her son Hugo it is one of Hugo's schoolfriends that she takes to her bed.  Schnitzler is a psychological novelist and sets up many reasons for her scandalous behaviour,  Is it boredom, novelty, risk - or simply revenge?  Revenge because the young man Fritz has hinted that Beatrice's late husband (of whom he does a good impression) had affairs - and/or revenge because Hugo is sleeping with an older woman, a former actress who may or may not have been one of his father's mistresses.  Beatrice only regrets her amour when she overhears the boys talking?  Are they talking - sniggering - about her?  That same night Hugo comes home dejected.  Beatrice guesses that his lover has dispensed with his services.  How can she recover what she and Hugo had before the summer?  The innocent intimacy of mother and son...

This is depth that Schnitzler is able to cram into his novella.  He switches between profound internal monologue and meaningless social chit-chat.  He probes Beatrice's character and motivations so deeply that a single paragraph lasts ten pages.  Yet he never bores, probably because he keeps the novella so short, and he never lectures us with his ideas.  Crucially, he does not judge his character. He merely gives us the symptoms and leaves us to make our own diagnosis.

This book is superb - the novella, which I love, at its best.  I shall definitely be reading more Schnitzler.
Posted by rogerwood at 17:17 No comments:

The Guts (awful title) is Roddy Doyle's return to Barrytown and Jimmy Rabbitte, quondam manager of the Commitments. 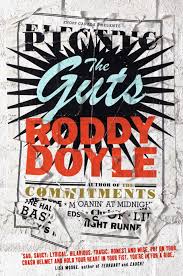 Jimmy is middleaged now but still in the music business, having sold his nostalgia website just before the Irish Tiger was shot dead in the Crash of 2008.  Jimmy and Aoife retain an interest in the business, though, because it is their passion.  At the start of the novel Jimmy is diagnosed with early stage bowel cancer, hence the horrible title.  Doyle, however, neither dwells nor delivers on the premise.  Jimmy seems to sail through his gruelling treatment, hence we do not get the full impact of his 're-birth' as he rediscovers the cutting edge of proto-punk Irish folk music from the early Republic and, this being a very effective comedy, composes and records the key song he just can't find for the album.

Just as Jimmy rediscovers his musical soul, so he reunites with his long-lost brother Les. Again, a promising storyline which Doyle fails to deliver on.  When Les visits Ireland and joins Jimmy at the festival where the fake song (which has, of course, become a YouTube sensation with the young) has to be performed, there is no surprise, no revelation.

The Guts came out in 2013 and completely passed me by.  I fancy it didn't get much publicity because of the shortcomings outlined above.  Nonetheless Doyle is one of the top Irish novelists of a pretty good generation.  No one says so much with monosyllabic dialogue.  The Guts might be technically flawed but it is nevertheless a joyous, hilarious, life-affirming read.
Posted by rogerwood at 12:55 No comments: 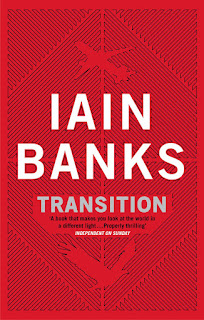 The problem with sci fi is that there is a balance needs to be struck between big idea and human interest.  So far as I am concerned Arthur C Clarke never found it, albeit his ideas were admittedly huge.  Transition isn't officially sci fi, in that Banks hasn't used his middle initial, his usual sci fi signature.  Perhaps he considered it more of a dystopian novel.  If so it is a multiverse dystopia.  His polished narrative skills just about got me through the 450 pages, and there were many passages of great interest, but there was no human interest, absolutely none, and that was a huge disappointment.

The crux of the matter is there are too many central characters spread across too many parallel Earths, none of them emotionally engaged with any other.  None have any engaging human traits and all are, to a greater or lesser extent, servants of the all-powerful Concern - the ubiquitous future-Nazis of far too many similar works.  Their means of travel - the titular transition - is trite, a device for getting them out of any peril at the speed of thought.  The consequences of the device are blithely ignored by Banks whereas for me that would have been the key to human interest - what does the non-transitioner make of the fact that their loved one's body has evidently been taken over by someone from a parallel world?

I can't deny Banks' narrative gifts but Transition has put me off any of his overt sci fi and I shall carefully check the nature of any of his straight novels before taking the plunge again.
Posted by rogerwood at 12:48 No comments: 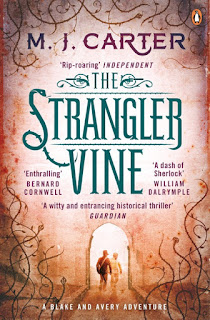 The Strangler Vine is the first novel by Miranda Carter, biographer of Anthony Blunt and author of The Three Emperors, an account of Queen Victoria's grandsons and how their relationships contributed to World War I.

For a first novel The Strangler Vine is an astonishing achievement.  Carter says she knew nothing about India in the 19th Century before starting the project.  By the end, clearly, she knew more or less everything.  The level of detail is just right.  We never get any sense of contrivance, avoidance or - just as fatal in a novel - showing off.

The story inevitably has hints of Kipling and John Buchan.  The blurbs cite Sherlock Holmes but it is much better than that (Conan Doyle is a martyr to contrivance and bodge).  The year is 1837 and young William Avery, a neophyte and impoverished officer in the private army of the East India Company, is paired up with lapsed agent Jem Blake to go in search of Xavier Mountstuart, the Byrom of India.  Avery is a huge fan of Mountstuart, whose work inspired him to seek his fortune in India.  Blake was Mountstuart's protege back in the days before he trading spying for literature.

The quest is multi-layered.  Nothing is as it first seems as Blake and Avery probe to the black heart of corruption in the Company.  The revelations keep on coming, alongside rip-roaring adventure and a sensitive portrait of India clinging to its last vestiges of independence.

I can't wait to lay hands on the second Blake and Avery, The Infidel Strain.
Posted by rogerwood at 12:57 No comments: