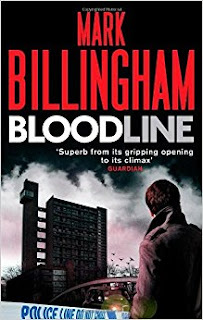 Hard to say where Bloodline fits into the Tom Thorne series. I suspect it is Number 8. Does it matter? Not really. Bloodlines is still the right side of the dividing line which threatens all series - it is a crime thriller with bits of character development thrown in, rather than a character novel with bits of crime bolted on. In fact Billingham handles the 'personal life' stuff very well here. There is a major domestic crisis which reflects the main crime theme but the character development is that both Thorne and his partner Lou bury their feelings in their police work and prioritise the crime.

It is a serial killer story because Billingham is essentially a writer of very dark noir. The question is, in an era where genetic research is everything, can serial killing be an inherited trait? Essentially, the supposed son of a famous serial killing is going round killing the children of his father's victims in order to 'prove' that his father was obeying genetic code rather than personal inclination. It's a great idea, handled well on the whole, though I would have preferred some deeper development. Billingham rather handicaps himself in that respect by sending super-pathologist Hendricks, the fount of all theoretical argument in Thorne's world, to a conference in Sweden.

My only other reservations are these: I didn't care for the tricksy prologue and quickly fathomed out its relevance; and I really didn't like the killer's journal. These are very minor quibbles. I'm sure other people thought they were great. Yes I guessed who dunnit as soon as we were introduced but that to me is no problem at all. The plotting was as ever fiendish and Billingham writes like a well-modulated dream. The dialogue crackles, especially the banter between Thorne and Hendricks.

Has Billingham succeeded Rankin as the premier UK crime writer of today or is that Val McDermid? It's a close one and I fancy it boils down to how quickly Rankin dumps the increasingly tedious Malcolm Fox and fully revivifies Rebus.
Posted by rogerwood at 14:57