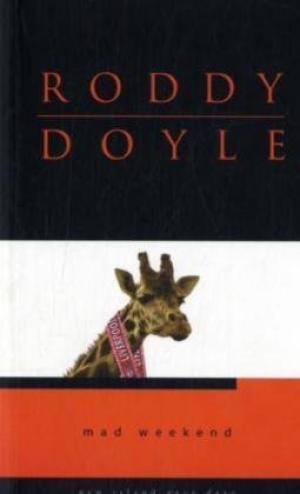 Open Door has published at least five series of short novellas by Irish authors, the Irish profits of which are donated to a charity of the author's choice. Open Door is a subset of New Island, Ireland's leading independent publisher, who have some enticing books on their list.

Mad Weekend is really a long short story, a shaggy dog narrative joke about three Dublin lads who go to Liverpool to watch a match, losing one of their number along the way. The ending is improbable - but who cares? You read Roddy Doyle because being in his company is fun. He writes like a dream, seemingly without effort but doubtless polished over and over. Everybody in his fiction is a bit of an eejit but essentially a decent sort.

It's a half-hour, forty minutes read. Can't think of a better use of my time. And I'm definitely signing up for New Island emails.
Posted by rogerwood at 15:23 No comments:

She Who Was No More - Boileau-Narcejac 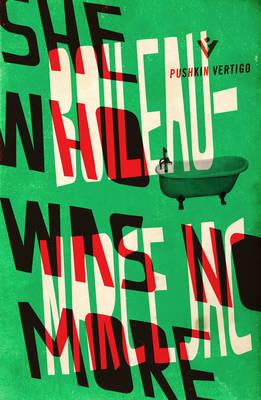 It's not unusual for writers to collaborate under a shared pseudonym - Ellery Queen, for example, or Nicci French. Less common, perhaps unique, is a collaboration in which the surnames are combined to make a brand name. That was the case for Pierre Boileau and Thomas Narcejac, both of whom were known writers before pooling their resources as Boileau-Narcejac. She Who Was No More was the first of twenty collaborative thrillers. They also wrote a boy detective series and authorised follow-on Arsene Lupin stories.

She Who Was No More became Henri-Georges Clouzot's classic film noir Les Diaboliques (1955) amd Hitchcock transformed D'entre les Morts (1954) into Vertigo (1958). In short, it's hard to imagine a pair who contributed more to the field of psychological thrillers - their deeply flawed characters, the carefully layered settings and atmosphere, and their killer narrative twists are all signatures of the genre - and yet they and their works are largely unknown. I would not have come upon them had it not been that the niche publishers Pushkin Vertigo (no prizes for guessing where the name came from) gave me a voucher for signing up to their emails.

The plot of She Who Was No More is so intricate that it's hard to describe without giving the game away. Basically the travelling salesman Ravinel and his mistress Lucienne conspire to murder Mrs Ravinel and head south with the insurance payout. It goes very wrong indeed, and the twists keep coming to the very end. Geoffrey Sainsbury's new translation retains the crisp dialogue and almost poetic descriptive passages. The words on the page work almost like music in counterpoint, making something beautiful and seductive out of a storyline that is basically sordid and venal. I loved it and am definitely keen to read more.

The best crime novel I have read this year.
Posted by rogerwood at 15:41 No comments: 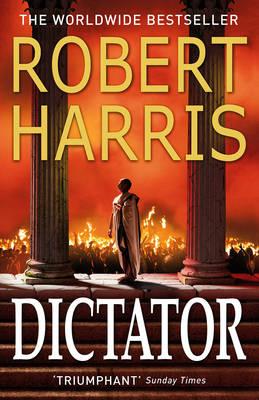 Dictator is the concluding third of Harris's Cicero trilogy (the others being Imperium and Lustrum). Unsurprisingly, given that it purports to be the lost biography of the great man written by his slave and later freedman Tiro, it ends with Cicero's brutal murder on the orders of Octavian/Augustus in 43BC. It is therefore the volume that deals with the period of Roman history that most of us are most familiar with, the dictatorship of Julius Caesar, his assassination, and the subsequent battle for supremacy between Octavian, Mark Antony and the Zeppo Marx of the Triumvirate, poor old Lepidus.

The trilogy is an awesome achievement. Vast amounts of research must have been done, yet Harris wears his acquired learning lightly. He is especially good at playing off Cicero's philosophical writing against his political opportunism - at one stage or another Cicero manages to suck up to all the major players without once recognising his own duplicity. As a party politician myself, I couldn't help but place him in the Independent camp, a chancer who will jump aboard any passing bandwagon and insist - at very great length - how it was his idea in the first place.

The murder is a historical gift of an ending to all his machinations, betrayed by an off-the-cuff witticism.

Our true hero, however, is Tiro. It is he who sees and reports all the flaws in his employer's character whilst remaining doggedly loyal to him throughout their long, shared life. Tiro is how Harris deploys his masterful gifts as a storyteller. Dictator in itself is not as good as, say, An Officer and a Spy; it is infinitely better than The Ghost. The trilogy as a whole is probably Harris's greatest achievement in fiction.  His new novel, Conclave, doesn't appeal - can it possibly be as good as Paulo Sorrentino's The Young Pope, now showing on Sky Atlantic? Checking through the page of 'Also by' I notice I haven't read (or, frankly, heard of) The Fear Index. Maybe that is where I should head next.
Posted by rogerwood at 14:24 No comments: 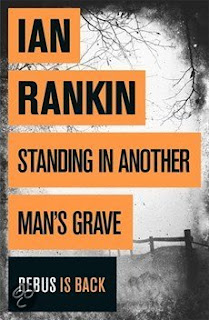 This, apparently, is Rebus #18 and Fox #3, which handily also reflects their respective contributions to this story. It's a great idea to bring the two police protagonists together but it doesn't really work because Fox of Complaints only serves to tell us what we already know - that Rebus, now retired and working for Cold Cases, is a bit of a maverick.

The idea of setting Rebus's return in Cold Cases, on the other hand, works well. Every professional relationship we have followed through the preceding 19 novels is now reversed - Siobhan Clarke, formerly his oppo, is now his direct superior; Ger Cafferty, notorious gangland kingpin, is now also officially retired and Rebus's occasional, awkward, drinking buddy. Otherwise, the things which defined Rebus are thankfully much the same: nothing in his life except policework; the drive always to make things harder for himself than they need to be.

Forget the Malcolm Fox stuff, which is either a failed gimmick or (as I prefer to believe) a necessary device to frame Rebus's potential return to the force; this is essentially old school Rebus. Perhaps I should amend that slightly. Standing in Another Man's Grave is Rebus after he became fully grown from around the fifth novel in the sequence, when he gradually transitioned from detective to flawed hero.

The story is a good one. Rebus is able to link a missing young woman to a series of previous disappearances which convince the inquiry team there is a serial killer on the loose. Thus Rebus is seconded to the main inquiry, reunited with Clarke, and all is business as usual. There is a good running joke about the ambitious DCI being called James Page (i.e. Jimmy Page, the Led Zeppelin legend). We have the usual conflict between traditional hands-on policing and modern micro-managed policing-by-computer. Rebus mixes with the Edinburgh underworld in all its glory.

The midpoint twist I expect we would all see coming - I certainly did for once in my reading life - and the ultimate solution is neither here nor there. Somebody had to do it, it has to be Rebus who finds him, no one of course believes Rebus and Clarke has to be equivocal. That is what we want from a Rebus novel. That is what we get. In this instance we also get Rankin at the height of his powers. It's a long novel, 350 pages, but Rankin is able to fill it with character and complexity.

Posted by rogerwood at 15:38 No comments: 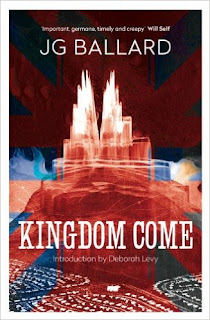 Kingdom Come, from 2006, was Ballard's last novel. It ploughs his usual field - suburban dystopia, As usual, his principal characters are mundane men and women offered just a glimpse of something higher. In High Rise the driving force was class division, the castes rigorously separated by floor, In Kingdom Come everyone is the same class - the amorphous middle class that inhabits the soulless, faceless dormitory towns around the M25. The totem to which they aspire is the shopping mall, the giant Metro Centro which dominates the fictional township of Brooklands. Even as our outsider, Richard Pearson (a typically anonymous name) pitches up, the dream is beginning to sour. Some lunatic opened fire on the mall shoppers thronging the atrium, Richard's estranged father, a retired airline pilot, is among the dead.

Richard has nothing better to do - he has just lost his job in adverstising alongside his marriage - so he stays on in Brooklands. He stays to settle his father's affairs there but ends up moving into the old man's flat. He gradually gets drawn in to suburban life. He meets various locals - solicitor, doctor, policewoman, He meets David Cruise, the minor celebrity who helms the Metro Centre's cable TV channel. He worked with Cruise in the old days. Richard has ideas for making Cruise's onscreen persona more compelling...

Ballard's problem is that his vision of the near future is already out of date. He thought that consumerism was rotting the public psyche whereas it was always unrestricted credit that made us sick. The banks were allowed to count debt as profit on the fatuous premise that it would someday be repaid. Only two years after Ballard published - a year or less before he died - the truth was revealed to the world. Malls like the Metro Centre were built on foundations of sand and how the economists and entrepreneurs wish we could be seduced back through the doors.

The other problem is that Richard Pearson is not really an outsider. He is a member of the glitzy London elite with his fancy flat in Chelsea and his classic Jensen car. Brooklands is the creation of people like him, the place where they decant the people they don't want to live next door. For people like Pearson the M25 isn't how the poor folk get into inner London, it's how the residents of inner London bypass the suburbs. Pearson virtually drips contempt and we can't avoid the conclusion that it's a contempt entirely reflecting that of his creator. Take the opening para:


The suburbs dream of violence. Asleep in their drowsy villas, sheltered by benevolent shopping malls, they wait patiently for the nightmares that will wake them into a more passionate world...

The plot, such as it is, is predictable, the twists predictable. Ballard is concerned not with his story but with his thesis and as such both suffer. The odd thing is, you can't stop reading, a measure of Ballard's deceptively prosaic style. In that sense Kingdom Come is a fitting coda to a fifty-year career, however it brings nothing new to the table.