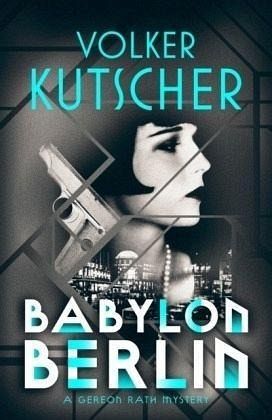 This is the original book (2007) of the TV series (2017). You'd be hard pressed to recognise it. The characters are different - Detective Inspector Gereon Rath is addicted to morphine in the series but only dabbles in cocaine in the book; Charlotte Ritter is a prostitute who wants to be a detective in the series but is a well brought up clerk in the book. Some characters are renamed for the series, others wholly invented for. For example, the Countess is a key figure in the series, a cross dressing singer in the central nightclub; in the book she makes a fleeting appearance towards the end, never sings, and the club which is the whole point of the series barely figures. Perversely, the only really interesting character in the book, other than Rath - gangland supremo Doktor Marlow aka Doktor Mabuse - doesn't make it to the series where he is replaced by the fairly anodyne 'Armenian'.


In short, the book is nowhere near as good as the TV series and I simply cannot understand why the companies involved bothered to buy the rights when they could (and largely did) make up an original period piece without being stuck with the rubbishy main storyline (tedious hogwash about smuggled Tsarist gold). Nothing about the book smacks of 'international best seller'. It starts well but rapidly loses pace and ends up about 40% longer than the storyline warrants. I've no idea whether the translation, by Niall Sellar, accurately conveys the original, but there is a horrific blooper towards the end - 'pedalled' rather than 'peddled' - which should see whoever did the proof reading summarily dismissed.


As you might surmise, I was hugely disappointed. I did like the cover art, though.
Posted by rogerwood at 16:14 No comments:

Some Hope is the third in St Aubyn's Patrick Melrose series, the successor to Bad News which I reviewed on this blog earlier in the year. 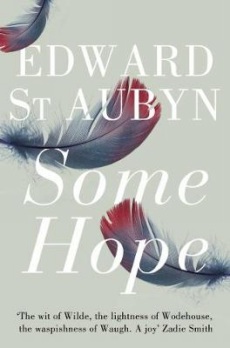 It's a successor only in the temporal sense. Eight years have passed since the death of Patrick's father in Bad News. Patrick is now 30, his fortune depleted, and completely drug-free. He has, it might be said, lost everything that drew us to him in Never Mind and Bad News. Fortunately he has kept his excoriating wit; unfortunately we are not afforded sufficient opportunity to wallow in it. For Some Hope is only tangentially about Patrick Melrose. In truth it is about an ill-judged birthday party at the country house of some ghastly aristocrats, who have invited Patrick along with countless others, including Princess Margaret, who was still among us when the book was published in 1994.


The novel consists of snatches of waspish conversation between the partygoers and examples of just how stuck-up and downright horrible Princess Margaret was in later life. While this is all amusing - and on occasion laugh-out-loud funny - it is not Melrosian. Patrick, hates himself just as much as he hates other people and is therefore entitled to the sharpest and blackest of humour.


I enjoyed the book and happy to recommend it. It is, however, impossible to escape the suspicion that St Aubyn was merely treading water when he conceived it. He can and has done better and I will continue to read him whenever I get the chance.
Posted by rogerwood at 15:37 No comments:

The Wench is Dead - Fredric Brown

Fredric Brown (1906-72) was a prolific author of pulp mystery and sci fi stories. The Wench is Dead (from 1953) is more of a novella, albeit a very short one. I read it as an e-book which didn't have numbered pages; I'm guessing it was somewhere around the 40 pages mark. And yet it is more novel than short story, encompassing the entirety of the convoluted action and a good measure of backstory.


Thus we learn that Howie is a scion of a Chicago business family who has won himself a Bachelor of Sociology degree but nevertheless finds himself washing dishes in a rundown Los Angeles chow house. He has a friends-with-benefits arrangement with B-girl prostitute Billie the Kid. His grand amour, however, is for nasty sweet wine. Drink, as so often, has been his undoing. Billie sends him to her neighbour Mame to borrow wine. Mame is a hype not a drunk but one of her customers the previous evening left her a bottle of the sweet stuff and she is more than willing to oblige Howie.


The next thing Howie knows, Billie is shaking him awake with the news that someone has killed Mame. Worse, the milkman saw Howie enter her apartment. His description is in the paper. Obviously Howie needs to scram - Billie will lend him the money. Howie feels obligated and offers to marry her. But Billie is a B-girl and knows she will never be acceptable in Chicagoan business circles. 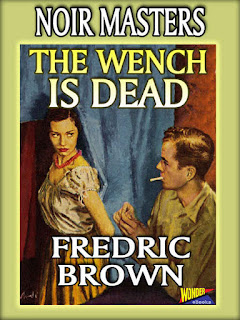 She's a diamond in the rough. Howie is a poor sap in a jam. The Wench is Dead is pure noir. The publisher of the e-book even contrives to have him played on the cover by Elisha Cook Jnr, dead before the titles roll in countless noir classics of the Forties and Fifties. And Brown distils it like fine Scotch on the rocks rather than the nasty pints of cut-price muscatel favoured by his anti-hero. Great fun.
Posted by rogerwood at 14:33 No comments:

Stalin's Ghost comes before Tatiana (reviewed below) in the decade-spanning Renko series. The tone and various characters are common to both. Renko, once the highest of high flyers, is hanging on to his job with his fingertips. A measure of how far he has fallen is that, when passengers claim to have seen the ghost of the late Stalin in an underground Metro station, Renko is put on the case. Needless to say, this is not what either the case or the book is really about. 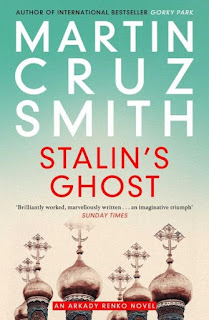 Renko is shot in the head by the father of his more-or-less adopted son, the street chess prodigy Zhenko. His bosses in Moscow use the excuse to banish him to the backwater city of Tver. It is Renko himself who requests Tver because his lover Eva has left him for the Special Forces hero turned celebrity cop Nikolai Isakov who is standing for the Russian Patriot party in the forthcoming election - and Isakov is grounding his campaign in his home city of Tver.


The plot is complex and I don't believe all strands are fully wrapped up. There is a book between Stalin's Ghost and Tatiana (Three Stations, published in 2010) and it may be that they are completed there. The characters are brilliant, as ever with Smith. Even one of the prostitutes on the Metro train sticks in the memory. Zhenko is annoying because he is a teenage boy. Eva is infuriating because she is unreliable.


And as always Smith's prose, simple yet refined, is a pleasure to read.
Posted by rogerwood at 14:14 No comments:

I found this thanks to paperbackwarrior.com, which has fast become a Facebook favourite of mine. Max Allan Collins I vaguely knew as a prolific writer of contemporary pulp (although I had no idea how vast his range was before looking him up on Wikipedia) and Quarry rang a bell somewhere at the back of mind. I soon realised, on reading the set up chapter for this story, that the bell was the TV series Quarry which I had enjoyed last year but which had nevertheless got cancelled. 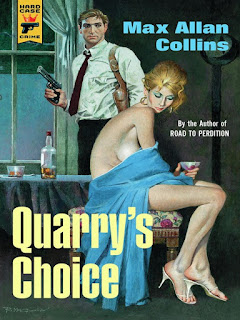 Anyway, the book series which Collins began at the time it is set (mid-Seventies) is about a Vietnam vet who returns home to find nothing waiting for him. No job, an antipathetic if not downright hostile citizenry and his wife having an affair with a local petrolhead, who soon suffers a nasty and highly memorable accident. Quarry (not his real name) is, however, exactly what the Broker is looking for - a hitman who can be relied upon to do the wet work efficiently and permanently. The Broker is the go-between. Quarry never knows who the client is or - up front - the reason the nominee needs to die.

Except in this case. The Broker is the client after Quarry saves him from an initial hit. The job takes him down to Biloxi where he signs up with the progressive wing of the Southern Mafia, which controls the casinos, bars and strip joints along the coast.


Turns out there is more wet work in Biloxi than anyone envisaged. Quarry's services are in high demand. He has choices to make - hence the title.


Collins writes with fluid grace. His phraseology is just sufficiently hard-boiled; it never even threatens to spill over into pastiche. His book, written in 2015 (39 years after Quarry's debut) but still set in 1972, is historically convincing with just the right amount of period detail. The twist, when it comes, is a great one. I did guess who it would involve but got nowhere near how.