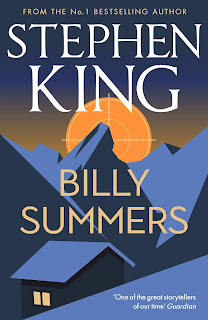 The latest King novel, Billy Summers is the story of a former US army sniper turned high-price, high-principle hitman.  Billy only kills bad men.  In this instance, he is promised a huge amount of money - enough to retire on - to terminate a lowlife killer who kills a man who beat him at poker and attacks a woman who brushes off his advances.  It seems a lot of money for a lowlife who's likely to get the needle anyway, but a lot of the cash is to cover Billy going undercover in the hick town, potentially for months, whilst the victim's lawyers argue against his extradition to a death-penalty state.

Billy always figures that these waters are deeper than they seem.  Billy likes to seem dumber than he really is.  It's part of his self-preservation routine.  He takes precautions, which get compromised when he settles into his fake life a little too well.  So he carries out the hit and disappears.  The promised payment doesn't arrive.  Billy has been stiffed.  That is unacceptable.

The rest of the novel is Billy's quest for settlement.  He has a young woman, Alice, alongside, whom he rescued from the street after she had been gang-raped.  Gang rape is also unacceptable and a price has to be paid.  All through the book we get Billy's back story: how he became a killer, then a sniper.  We also get a powerful reprise of The Shining when Billy and Alice are in Colorado, preparing the final act, but that is the only hint of the supernatural in Billy Summers.  In that sense it follows Mr Mercedes and the Bill Hodges trilogy.  In a sense we also get the gunslinger of The Dark Tower.  A lot of King tropes, then, which only enrich the story.  It is a beautiful book, as good as anything King has written, not a single bum note that I could see.  A consummate treat from a living, thriving master.

Posted by rogerwood at 14:13 No comments: 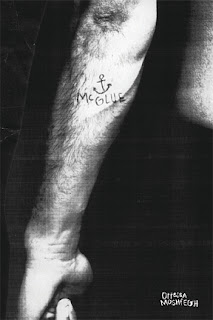 McGlue (2014) is the only novella so far from multi-award-winning US author Moshfegh.  It's a cracker.  I read it in a sitting because I couldn't put it down.  McGlue is a total reprobate, more or less seduced into running away to sea by an acquaintance called Johnson.  The year is 1851; both McGlue and Johnson come from the township of Salem.  McGlue's only interest in life, from an early age, has been rum.  Johnson keeps him well-liquored and relatively safe, because Johnson ultimately wants McGlue to do him a favour.  One morning in Zanzibar McGlue comes more or less to his senses.  He is taken aboard ship, kept confined, and returned to Salem to stand trial for the murder of his friend Johnson.

The book consists of McGlue trying to untangle the tatters of rum-soaked memory.  He is often unable to tell fact from delusion - Johnson, for example, regularly visits him in prison as he awaits trial.  It is wonderfully done.  Moshfegh inhabits every pore of her unappealing yet oddly innocent protagonist.  She's won a lot of prizes and no wonder.

Posted by rogerwood at 14:59 No comments:

Confessions of a Mask - Yukio Mishima 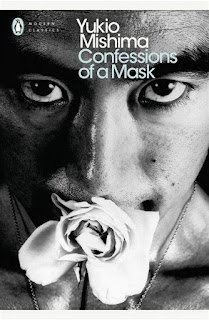 Confessions of a Mask is Mishima's first major novel, published when he was only 24.  It is a roman a clef, heavily autobiographical, about a young man coming of age in the dying days of the Second World War.  It is different and daring in that it is about the hero's burgeoning homosexuality, which he hides behind a 'mask' of normality by courting a young woman he tries hard to convince himself that he loves.  I hadn't realised before that 'Yukio Mishima' is itself a mask, a pen-name adopted to shield his respectable and strait-laced family.  Nothing Mishima writes is ever likely to be bad.  He is, to my mind, one of the finest writers of the Twentieth Century, the great 'lost' Nobel Laureate.  But personally, he is repellent - moreover, he knows it.  Here there are passages in which you very nearly hate him, yet he saves the situation because you cannot possibly feel more repelled by Mishima than Mishima himself does.  Knowing what he ultimately did makes the frequent references to suicide in this young man's text all the more ominous.  Confessions of a Mask is a masterpiece, no question, but it's not a comfortable one.
Posted by rogerwood at 14:56 No comments:

Email ThisBlogThis!Share to TwitterShare to FacebookShare to Pinterest
Labels: Confessions of a Mask, Japanese Literature, roman a clef, Yukio Mishima 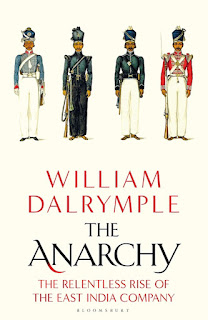 I adored Dalrymple's Return of a King; this one not so much.  I knew no more about Afghanistan than I did about colonial India, but Dalrymple managed to educate me about the former - again, not so much about the latter.  Of course, the latter is even more complex, but I never felt confident about the geography or tribal ethnicity of the main protagonists of The Anarchy.  That said, I was clear about the causes of the Anarchy and its timeframe.  Unfortunately, it was all rather a depressing mirror of the state I now live in and detest.  Debauched, long-outdated aristocrats desperate to claw their last profit from the poor, outwitted by the first global corporation, imposed upon a culturally rich nation by foreigners who had yet to accumulate much culture of their own.  The standout character was Shah Alam, the last hope of the Mugal Empire, who did his best, suffered much, and ultimately came to nothing much.  Tipu Sultan of Mysore was another strong character but overall the cast seemed to be rather two-dimensional.  Dalrymple only really came good when discussing those on both sides who truly loved India as much as he does.  And the chapters were far too long.

Posted by rogerwood at 14:19 No comments: 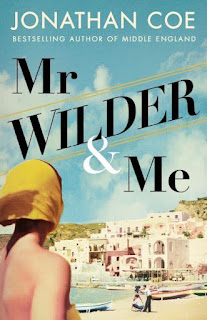 I've read a bit of Jonathan Coe before and always enjoyed them - but Mr Wilder & Me is in another league.  It's simply a masterpiece of fiction.  The story is simple enough - in 1977 a young Greek woman called Calista Frangopolou is asked to provide translation services for the Greek shoot on Billy Wilder's penultimate film, Fedora.  She becomes innocently friendly with Wilder, his writing partner I A L Diamond ('Iz') and their respective wives.  She continues with the crew as they move on to Munich and Paris.  In Munich she hears about Wilder's wartime service and a postwar documentary.

In the obvious sense it's a study of a refugee who became a feted director but outlived his vogue - mirrored, of course, in Tom Tyron's rather trashy novel about Fedora which I rather enjoyed at the time.  But Calista is telling her recollections from circa 2013, when she has become a moderately successful composer of movie music and has twin daughters about to leave the domestic nest.  Lessons learnt from Wilder and Diamond back in the day come into play.

I don't know how Coe has done it, but in a book only 250 pages long he manages to create an enormous amount of room for his characters to move and develop in.  This is how he is able to avoid cheesy coincidence and deploy extremely poignant subtlety instead.  And in the middle of the book, when Billy's secret is revealed, he slips effortlessly into movie-script format - more brilliantly still, he does it in Wilder-Diamond style.  Like everything else in Mr Wilder & Me, it's note perfect.

Posted by rogerwood at 16:24 No comments: 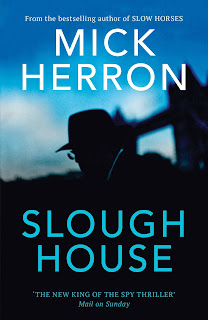 Slough House has been deleted from the Regent Park mainframe.  The Slow Horses are being tailed.  Ex-Slow Horses are being tracked down and killed.  Jackson Lamb, for all his innumerable faults, is not going to tolerate things happening to his joes - which is bad news for those who commit such affronts.

Diana Taverner, first desk at the Park, has meanwhile dabbled with privatisation.  Not for personal gain, of course, but because the GRU have been sending over idiots to spread toxic chemicals around English cities.  This turns out to be a mistake on many levels, not least of which is that, in her hour of need, she has to turn to Jackson Lamb.

Also back in the frame is Sid (Sidonie) Baker, who once took a bullet for River Cartwright, is back from the dead, hiding out at the country house River just inherited from the Old Bastard.  She thinks she is being pursued by Mormon missionaries.  The Yellow Vests are venting on the streets of London and Jackson Lamb meets a gay American of restricted growth who believes his boyfriend has been murdered on the orders of Vladimir Putin.

Mick Herron's alternative take on the Secret Service is back for a seventh anarchic romp - the best to date in my opinion.  The critical take on contemporary Britain is absolutely on the nose and there were many laugh out loud moments.  Herron is also excellent on the suspense, where needed, and the car chase through benighted rural Kent was beautifully done.  A masterpiece of its kind.

Posted by rogerwood at 15:13 No comments: