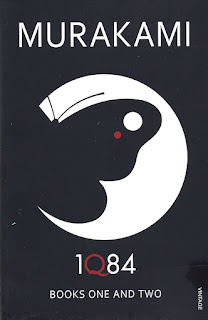 I do so many things backwards. Reading 1Q84 was one such. I read it out of sequence. I knew how it ended before I knew how it began. It made no difference whatsoever. I enjoyed every second of it and discovering 1Q84 introduced me to Murakami's other work, of which I have now read a good deal.


Here we get everything we need to know about Tengo, Aomame and, perhaps most importantly, Fuka-Eri, the seventeen year old genius behind Air Chrysalis and the Sakigake cult from which she has escaped. It's an interesting link - Aomame left the Witnesses at about the same age. Akebono, which I don't remember from the later books, was a militant sub-sect of Sakigake, and their shootout with the police (very 1980s) is why the police (in 1Q84) are armed. This is the first discrepancy which Aomame notices when she crosses into the parallel world. Tengo doesn't actually cross over in this first book. We learn the full details of the very tenuous connection between our two protagonists and - for what I suspect is the one and only time - why the book is called 1Q84. Aomame comes up with the name to reinforce the idea that she is no longer in her 'real' 1984; whatever this is, it isn't that, so the Q stands for question mark. I can't even imagine how this worked in the original Japanese.


The style - leisurely, straightforward prose rolling gently out - is there to smooth the edges of the ideas which are often incredibly complex. I feel sure we get most if not all of Murakami's world view across the trilogy, but it so gently, so persuasively done that nothing jars, nothing seems at all unacceptable. For example, we see what Aomame does for a living right at the beginning of the book. We are later given suggestions why she does it. In lesser hands it would repel us or at least warn us we are tackling a noir world. But here it doesn't repel. Here the two-moon world is far from noir.


1Q84 is what it was instantly recognised as being - a classic of world literature. That's a beautiful thing.
Posted by rogerwood at 14:53