Like everybody else, I read Gorky Park when it came out thirty-plus years ago. I later read Stallion Gate, which I loved. I wanted to read Rose but never came across a copy. And now here is Tatiana from 2013 and Arkady Renko, hero of Gorky Park, is still going strong. 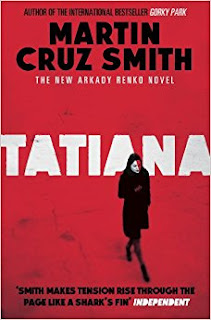 He's had a tough time in the intervening thirty years. For one thing, time runs differently for him and he is only perhaps a dozen years older than he was in Gorky Park. He has a bullet rattling round his skull and an adopted sort-of son. He may have had DS Victor Orlov as a sidekick in the old days; if so, I don't remember. Orlov is the cop other writers would have made their protagonist - dark, drunken, violent, but rock solid on the side of the angels. Cruz chose Renko, the outsider, the man of principle, who could have risen to the top of the tree if only he had been prepared to play dirty.


Russia, of course, has changed completely since the Eighties. For one thing it's Russia instead of the USSR. Those who would once have risen to power through the Party, now rise through gangsterism. Mob bosses are billionaires. Honest cops and investigative journalists, however, remain the enemies of the state.


Tatiana is an investigative journalist. She has jumped to her death from her rundown apartment. Renko doesn't believe it. It is not his case. He is supposed to covering up whoever it was shot billionaire hoodlum Grisha Grigorenko. Tatiana and the late Grigorenko lead him to Kaliningrad, the capital of organised crime, where he also commits to solving the murder of a high-price interpreter by a man driving a butcher's van with a happy plastic pig on top.


It's the story details that make Cruz Smith's novels stand out from the rest. Here, amongst many others, we have the Ferrari of sports bikes, chess hustling, the interpreter's personal shorthand system. Some of the characters are more interesting than others. You've just got to love a capo di capo called Ape Beledon. Most important of all is the authorial control. He has a lot of material - he is determined to explore the psyche of his hero and, to a lesser extent, those close to his hero - but he never forgets that this is a thriller. It's purpose is to excite the reader. Which it certainly does. Pure reading pleasure.
Posted by rogerwood at 15:06 No comments: 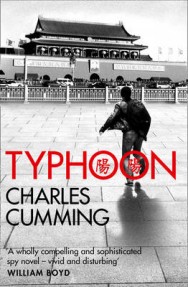 Typhoon is the fourth of Cumming's post Cold War spy novels. It comes straight after The Spanish Game, which I reviewed earlier this year and was greatly impressed by. It shares some of the same elements - revolutionary terrorism in a forlorn corner of an apathetic nation - but here the nation is China and the minority the Uighurs of Xinjiang province. I have to be honest, I had never heard of the Uighurs, and in a way I guess that's Cumming's point. I also have to admit, I did not love Typhoon.


Reading Typhoon, I was constantly reminded of Le Carre's The Perfect Spy, which I have been reading sporadically for well over a year and just cannot come to terms with. One the one hand I hate it for its endlessly looping narrative and lack of narrative drive, on the other I have to admire the sheer skill that has gone into writing it. Being compared with Le Carre is no bad thing. Maybe Typhoon is Cumming's Perfect Spy, not the most enjoyable of his output but an essential landmark in the development of a great writer.
Posted by rogerwood at 15:28 No comments:

A Hero in France - Alan Furst 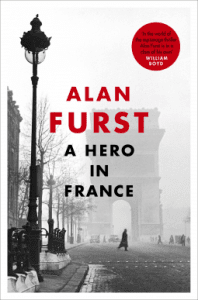 I've said it before, I'll say it again: Alan Furst just gets better and better. A Hero in France came out in 2016. It's the usual territory - World War II, Europe, spies and agents - distilled down to the consistency of a fine cognac. It's the shortest of Furst's novels, just over 200 pages, with all extraneous matter chiselled away so that every word not only counts, it resonates.

It's early 1941 and Britain, France's only ally, is losing the war. 'Mathieu' - his cover name or, more appropriately, his nomme de guerre - has set up one of many independent resistance cells smuggling crashed airmen out of France and allied agents in. But the net is tightening. Berlin has tired of the French security service's attempts to crack down on resistance and is thinking of sending in the Gestapo. Before they do, however, they send Berlin's top cop, Otto Broehm, to coordinate attempts to break down the Parisian cells. He recruits an undercover agent, the Serbian criminal Kusar, to infiltrate Mathieu's group.

As always with Furst, the setting is impeccable, utterly convincing. You feel confident that he knows these streets, has visited these bars and cafes, has ridden these trains. His characters are mostly pseudonymous yet they all have back stories, the full range of emotions, hopes and fears. They interact. They have the sort of relationships that feel completely right in wartime. Indeed, I could have done without the last couple of pages in which their real names and what happened to them are revealed. It's not something I felt the need to know. And it also means we will not be meeting them again in a future book.

Posted by rogerwood at 15:21 No comments: 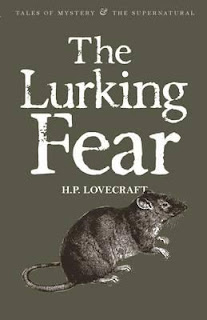 This Wordsworth collection concentrates on the non-Cthulhu. non-Arkham stories. The main preoccupation here is the Gothic, specifically inbreeding and ancient bloodlines tainted. The introduction by Matthew J Elliott is useful and the last entry is Lovecraft's own insights into his craft .Notes on Writing Weird Fiction'.


As for the stories themselves, some are unfinished or abandoned drafts, included for the completists. But there are also classics like 'The Music of Erich Zann', 'Beyond the Walls of Sleep', 'The Beast in the Cave' and, my favourite, 'The Rats in the Walls'. Overall, though, you wouldn't want this collection to be your first acquaintance with Lovecraft. There are many better and more typical collections, of which I have quite a few.
Posted by rogerwood at 15:10 No comments: 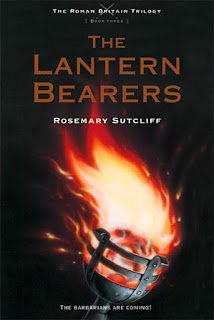 This is the third book of Sutcliffe's Late Roman trilogy, published as long ago as 1959. It is a book for Young Adults but makes no concessions to juvenile sensibilities. The battles are brutal and forced marriage laid out with all its consequences. Oddly for a woman writer, the female characters are all cyphers - they get carried off against their will, they have children and for that reason only stay with their unwanted spouses - including our hero Aquila.

Aquila is Romano-British. He is meant to be with the last legion when it sails away from Britain in 410. He deserts, gets captured by the North Saxons and ends up fighting with the Celtic resistance in the mountains of Wales. |For me, this is where things get interesting - how does Sutcliffe handle the Arthur problem? Head on. She starts with Geoffrey of Monmouth, strips away the magical fluff, and leaves us with Ambrosius Aurelielinus and his young nephew Artur. On the opposite side she gives us the story of Vortigern, elected king of the Britons, and his rebellious sons. Vortigern invites the Saxons to settle and defend him against the Scots and Picts. He marries Hengist's seductive daughter Rowena and essentially loses all his illusory power.

The historical detail is magnificent, as accurate as it can be, given that Sutcliffe is writing about the onset of the so-called Dark Age. Aquila, who we follow from his late teens to middleaged warrior with a battle-aged son, is a compelling character, deeply conflicted over his lost Roman roots and loyalty to the island of his birth, however hopeless the cause. It is only at the very end that the meaning of the title is revealed and I found it quite moving.

The real treasure here, though, is the magnificent artwork of Charles Keeping. 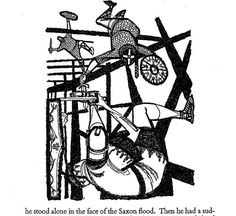 Posted by rogerwood at 15:12 No comments: 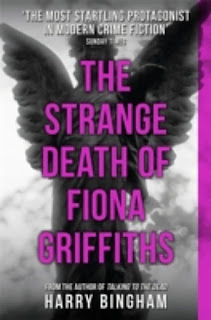 This is the third in Bingham's superb series (I know I'm reading them in reverse order, but what can you do?). It is slightly better than The Dead House, which I thought was brilliant, and just as good as The Deepest Grave.


The premise - that Fiona is given the chance to enhance her skills with an intensive course in undercover policing, then gets to do it for real in a multinational computer scam - allows Bingham to explore his character's tangled psyche. We already know that Fiona is 'different' psychologically, but the assumed personalities she has to take on for the sake of the story throw into sharp relief just how shallowly-grounded her actual personality is. Fiona Grey, for example, is a muted version of Fiona Griffiths, Jessica Taylor is Fiona Griffiths turned up to eleven. And of course all this is described in first person, present tense, by the Fiona Griffiths we are used to.  Her underlying disorder, Cotard's Syndrome, which put her in the psychiatric hospital as a teenager, bubbles up throughout. No wonder boyfriend, wannabe fiance Buzz stands no chance of a permanent relationship. No wonder hitman Vic very nearly wins the girl.


Again, I cannot recommend the Fiona Griffiths series highly enough. If you like dark crime fiction, you really must check it out asap.
Posted by rogerwood at 15:06 No comments: