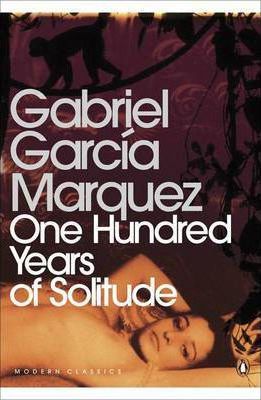 It has to be one of the greatest opening lines in literature: "Many years later, as he faced the firing squad, Colonel Aureliano Buendia was to remember that distant afternoon when his father took him to discover ice." Superb - and the quality does not diminish over the next 400 pages.


Ostensibly One Hundred Years of Solitude is the saga of seven generations of the Buendias, first family of Macondo. In many ways it is the same story, lived over again by succeeding generations.


The men are always (Jose) Arcadio or Aureliano. The Arcadios tend to be seekers after truth who end up going mad. The Aurelianos are more adventurous but equally monomaniacal.  Several of the women, notably the first matriarch, Ursula Iguaran, live more than a hundred years. Ultimately it all ends in near incest when Amaranta Ursula gives birth to Aureliano, son of her nephew Aureliano. The role of the matriarchs is to keep the house going. The women are either earth goddesses or professional virgins. The first Amaranta is a professional virgin; Renata Remedios, known as Meme, mother of the semi feral Aureliano who sleeps with his aunt, becomes a nun after the father of her child is crippled. Remedios the Beauty is so beautiful that one day she is simply carried off to Heaven. Her brother Aureliano Segunda searches the whole of Colombia for a woman very nearly as beautiful as Remedios. The high-born Fernanda bears him three children, eventually, but nevertheless likes to think of herself as virginal. Fernanda is the matriarch, especially since her husband a is living with his mistress, but in fact the house is maintained by her mother-in-law the long-suffering Santa Sofia de la Piedad. Aureliano Segunda's whore, Petra Cotes, is not the first immoral woman to become involved with the family. The third generation brothers, Aureliano Jose and Arcadio, both have sons by the local wisewoman Pilar Ternera, who outlives every generation, attaining the incredible age of 140. Colonel Aureliano Buendia - he of the opening line - has seventeen sons, all by different women, all called Aureliano, during his pointless military adventures.


Time, in Macondo, is more of a pool than a line. We are never told exactly when the hundred years begins or when it ends. We know that trains and movies ultimately arrive. There is a period of prosperity when the banana company builds a new town opposite the old, but that ends with four-and-a-half years of ceaseless rain, which is followed by a drought. Then the winds come and blow Macondo away into the swirl of history.


Let us return to Remedios the Beauty, the one who was carried off to Heaven. That is not a euphemism - she really is carried off by supernatural powers. One Hundred Years of Solitude is one of the masterpieces of magic realism. Other miracles happen. The gypsies and the carnivals bring real magic to town. The gypsy leader Melquiades dies in the time of the first Jose Arcadio Buendia but keeps visiting the house until the sixth Aureliano finally manages to decipher the sanskrit manuscript Melquiades left behind - the prophecy which foretells the fate of Macondo once its hundred years are up.


Magnificent - indisputably a work of genius. Already I want to read it again.
Posted by rogerwood at 16:14