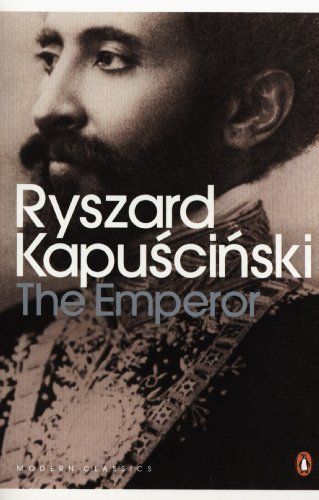 This Penguin Classic is a classic of reportage rather than fiction or indeed non-fiction. Kapuscinski was a Polish reporter who had spent time in Ethiopia but who was not a witness to the fall of Emperor Haile Selassie in 1974. He knew, however, that the abolition of the Ethiopian Empire was probably the last there would ever be. Slipshod commentators often talk about 21st century empires in connection with Russia but there is a fundamental difference: Vladimir Putin might have absolute autocratic authority but not even the most servile Kremlin bureaucrat thinks that authority will pass to his son and heir, if he even has one. In Imperial Ethiopia all authority was vested in the emperor, whose main claim to power was that he had managed to beat all the other princely and ducal contenders. In his youth Ras Tafari had probably been the best of a bad lot. During his exile during the Italian invasion he had even managed to establish himself on the world stage, perhaps the first black ruler of the modern era to do so. But after forty-four years on the throne, four-and-a-half decades of sitting cocooned in his palatial nest of sycophants, what had he become? One of his retainers, referred to as F, provides the answer as early as page 5:


It was a small dog, a Japanese breed. His name was Lulu. He was allowed to sleep in the Emperor's great bed. During various ceremonies, he would run away from the Emperor's lap and pee on dignitaries' shoes. The august gentlemen were not allowed to flinch or make the slightest gesture when they felt their feet getting wet. I had to walk among the dignitaries and wipe the urine from their shoes with a satin cloth. This was my job for ten years.

Yes, the institution of monarchy had become so debased that significant people had to put up with being peed on, and a man was employed to wipe their shoes. This, however, was not the most ludicrous example of royal protocol. There was the Hour of Assignments during which the emperor doled out rewards to his courtiers; there was no penalty for those who had failed for some reason, they were simply not rewarded and that was the kiss of death for their career. Haile Selassie, it was maintained, had risen above the hurly-burly of actually conferring with his courtiers face to face. His face was immobile, his voice inaudible. Thus all power was invested in the Minister of Pen who alone stood close enough to hear the imperial whispers. But he too was dispensable. If His Venerable Highness should let it be known that the Minister of the Pen had misinterpreted his wishes...


The court has officers such as Keeper of the Third Door and Imperial Pillow Bearer, but no elected politicians and no serious ministers. Yet the palace was a hive of activity from early morning to late at night. Hundreds of people busied themselves with absolute nonsense and useless flummery whilst outside the compound the people starved to death in their thousands. This is the regime that Kapuscinski recreates through interviews with the former officials whose world fell apart when Haile Selassie turned out to be mortal after all.


A lesser hand might leave us feeling sorry for the senile old man in his palace. Certainly Kapuscinski has sympathy for the redundant servants who, in the post-imperial Ethiopia cannot walk safely in public and who have to hide behind their initials in his book. But he has no sympathy at all for Hailie Selassie and his corrupt ministers, the former under house arrest, most of the latter executed. At the end of the book he writes:


With state money the dignitaries built themselves palaces, bought estates, travelled abroad. The Emperor himself amassed the greatest riches. The older he grew, the greater became his greed, his pitiable cupidity. One could talk about it with sadness and indulgence, were it not for the fact that HS - he and his people - took millions from the state treasury amid cemeteries full of people who had died of hunger, cemeteries visible from the windows of the royal Palace.

I wish I could think of a journalist that insightful writing today.
Posted by rogerwood at 17:20