Inside the Whale - George Orwell 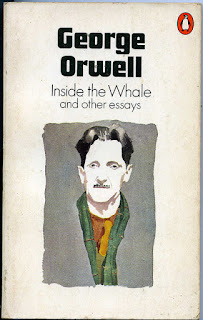 What we have here is a collection of Orwell's essays, mostly prewar and mostly concerning literature. The title essay, for example, dates from 1940 and starts with Henry's Miller's Tropic of Cancer which in those days was still a scandalous, banned book. Orwell concludes it is a good book but that its subject matter is largely irrelevant because it is 'inside the whale' - sealed off, in a sort of time bubble of its own. It is not great literature, Orwell argues, because it is utterly devoid of politics. Indeed, politics in that special era should be the hallmark of literature, according to Orwell. That essentially is what the essays in this collection have in common, save for 'Down the Mine', which is extracted from The Road to Wigan Pier and 'Shooting an Elephant' which is part of his Burmese writing. Both are simply padding and stick out like sore thumbs. 'Politics and the English Language' is nowadays printed in more or less everything to do with Orwell and I have already given it a standalone review on this blog.


'England Your England' (1941) chimed with me because one of my interests is the Appeasement Period which dragged us into World War II. It has a great opening line ("As I write, highly civilized human beings are flying overhead, trying to kill me.") and Orwell is surprisingly generous in dealing with Prime Minister Chamberlain, architect of the disaster:


Like the mass of the people, he did not want to pay the price either of peace or of war. And public opinion was behind him all the while, in policies that were completely incompatible with one another. It was behind him when he went to Munich, when he tried to come to an understanding with Russia, when he gave the guarantee to Poland, when he honoured it, and when he prosecuted the war half-heartedly. Only when the results of his policy became apparent did it turn against him; which is to say that it turned against its own lethargy of the past seven years.

I did not like 'Lear, Tolstoy and the Fool'. I disagree with Orwell's premise, feel he is ungenerous to the aged Tolstoy, makes no provision for the potential awfulness of the translations Tolstoy had, and - in common with his era  does not understand the mechanics of Elizabethan play-making. 'Politics a Literature' relies on Gulliver's Travels and I no longer have any interest in Gulliver's Travels. I was amazed when I read the real thing when I was nineteen or twenty but, like much satire, suspect it is a one-only revelation. My favourite, oddly enough, is the final essay 'Boy's Weeklies' (1939) which argues that the Victorian hangover comics Gem and Magnet present a hermetically sealed world from the previous century (Orwell makes the same point that recently dawned on me - that the forebear of all 'school' stories is Stalky & Co rather than Tom Brown's Schooldays) whereas more modern, Americanized boys' comics like Hotspur and Rover purposefully embody the far-Right views of their owners. No change there, then.


Just a final note: how great is that portrait by Patrick Procktor on the cover?
Posted by rogerwood at 15:07