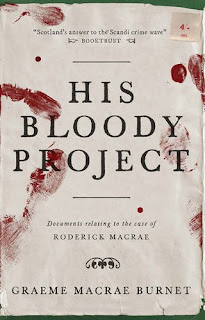 His Bloody Project didn't win the 2016 Man Booker Prize (I can't recall what did) but it outsold all the other novels on the shortlist. It purports to be a dossier of documents found by Burnet when researching his Macrae ancestors. The documents relate to the murder of Lachlan Mackenzie of Culduie in Ross-shire in August 1869, for which seventeen year-old Roderick Macrae was hanged in Inverness in September.


The documents consist of a handful of witness statements gathered by local police, the account which Roddy wrote at his solicitor's request whilst awaiting trial, a report (wonderfully entitled Travels in the Border-Lands of Lunacy) by J Bruce Thomson, resident surgeon at Perth prison and leading criminal anthropologist, an account of the trial compiled from contemporary newspapers, and a short epilogue describing Roddy's wretched end.


It's all a fake - or is it? We can't fail to notice that Burnet is himself a Macrae. It is the actuality question which hooks us to begin with. After all, there can't be much of a whodunit here. There are only nine houses in the crofting hamlet and Roddy was seen heading to Mackenzie's with the murder weapons and again, coming back half-an-hour later smothered in fresh blood. More to the point, Roddy has insisted, from that moment forward, that he alone did it. Is he mad? This is the only hope of his solicitor, who commissions the report from Thomson. But there is no sign of madness in Roddy's writing. True, some of his neighbours consider him to be an imbecile, but his schoolmaster wanted to put him forward for a scholarship.


Burnet ingeniously plants a couple of clues that suggest all might not be as it seems. They come together at the end but - another masterstroke - we don't get Roddy's reaction to them because defendants were not at that time allowed to give evidence in court.


Alongside all this we get a fascinating insight into the life of a mid-Victorian Highland crofter, a life that seems unchanged for thousands of years and which, to those trapped in it, must have seemed like it would never changed - renting their land at the whim of the laird and his factor, their only refuge their grim church. One of the great elements here is Burnet's portrait of utter, hopeless despair in Roddy's father John, a man in his forties looking twice his age, armoured in misery.


A tremendous book by an author of prodigious promise. There is an earlier novel, The Disappearance of Adele Bedeau, which won the Scottish Book Trust New Writer's Award in 2013, so I must get hold of that. And Burnet's next can't come soon enough for me.
Posted by rogerwood at 15:42