The Turn of the Screw - Henry James 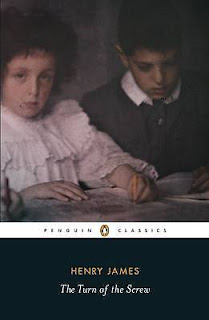 The original, the classic, freaky children horror story. Yes, not one but two malicious brats conjuring up the ghosts of their dead governess and factotum, who may also (it is heavily implied) have been their abusers. Strong stuff for 1898; extremely strong stuff for the sexless aesthete Henry James. Atypical, definitely, but perhaps that's why The Turn of the Screw is his best known work.


Being a Penguin Classic, this edition comes with a pompous introduction by a Yale professor (David Bromwich) and James's own, even more pretentious introduction to the New York edition of 1908. I didn't bother pursuing either. James was a writer - everything he needed to say should be there on the page. I also did not require two pages of asinine notes from Philip Horne of UCL. I hope Phil didn't get paid for his labours.


Enough sounding off - time for the good news. The Turn of the Screw is a mini masterpiece. More than that, it can be seen as a turning point in English language ghost fiction. Before James, the stock phantom tended to be an unquiet soul needing its wrongs to be righted, or a personality-free memento mori in the manner of Dickens. These ghosts are very much personalities. Peter Quint and his disgraced lover, the former governess Miss Jessell, are completely aware of what is going on at Bly House. Whatever they got up to in life - and it was bad enough to corrupt their appearance post mortem - young Miles and sickly sweet Flora were fully involved with it. The implication is that Miles has been expelled from school for telling his friends the lurid details. When the new governess - our unnamed narrator - tries to drive them off, Quint and Jessell fight back. The final confrontation is horrific, and the last line, which I won't give away here, has to be one of the most chilling last lines in occult fiction ever.


The problem with James, to the modern reader, is his verbosity. He writes in a rhetorical style. Famous orators like Churchill, Kennedy and Obama, spoke emotively and effectively about absolutely nothing. Most of what they said, transcribed onto the page without the speaker's personality and performance, is utter nonsense. James does the opposite. He desperately piles up the words in search of every last nuance. In later life, as the notes on the 1908 edition demonstrate, he made matters worse, adding more verbiage long after the fire of creation had gone out. Unfortunately what Penguin gives us is the 1908 edition.


Nonetheless, The Turn of the Screw is the key text in the development of modern literary occult fiction. A must-read for every aspirant practitioner.
Posted by rogerwood at 15:35