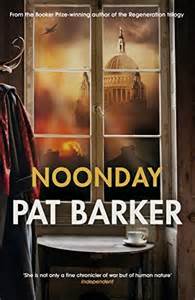 Noonday is the concluding part of Barker's second wartime trilogy (unlike the Regeneration Trilogy, it doesn't seem to have a name), which interestingly carries the characters forward from WWI to WW2, specifically 1940 and the London Blitz.


I have said before, in my review of Toby's Room, that this trilogy is not as good as Regeneration, albeit the premise is much the same - artists at war are subjected to pioneering medical treatments. The difference is that Regeneration is about poets, many of whom we have heard of, having their traumatised souls put back together in a North Country sanatorium; this second sequence is about painters and plastic surgery and is set primarily in bohemian London, which makes it all a bit precious. Another shortcoming is that the characters are not real people but heavily and obviously based on real people, which is distracting for those of us who can guess. And, unfortunately, the central character in the latter is a woman, Elinor. In Toby's Room, therefore, credibility is stretched to get her into the hospital where Kit Neville is having his face restored.The truth is, society women played virtually no meaningful role in WWI. Some indeed did a bit of nursing but mostly it was just good works and posturing. Things were different in WWII and that makes Noonday a much better book than Toby's Room. Elinor, her husband Paul, and the disfigured Kit Neville are all actively engaged on the Home Front, Paul an ARP warden, Elinor and Kit both driving ambulances. They are all now in their Forties, facing the same middleaged crises we all face, only heightened by the very real prospect of being blown to smithereens at any moment. 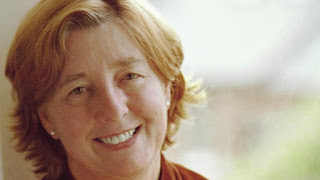 Barker is a fantastic writer and there are moments of great beauty here. There is a moment towards the end when Kit and Elinor wave to one another across a firestorm which is truly heartbreaking. I also really enjoyed the skewering of Kenneth Clark, long before his Civilisation fame, recruiting war artists from his personal coterie and chasing after young girls.