Down and Out in Paris and London - George Orwell 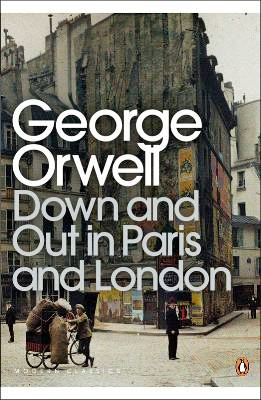 Down and Out is the direct precursor to The Road to Wigan Pier, previously reviewed on this blog. It is nowhere near as effective, partly because half of it doesn't ring true.


Originally it was more an essay than a book and dealt only with Orwell's time as a dish-washer in Paris in the late 1920s. Before Orwell could find an English publisher he had to pad it out with the English element. British publishing, even more then than now, was London-based and London-focused, so whilst most of the tramp material takes place around rural England, Orwell clearly had to squeeze in enough London sequences to keep the interest of the Metropolitans. The fatuous framing device he used to achieve this - popping in to touch a London friend for a couple of pounds every so often - is what convinces me that Orwell was never in fact a tramp but fictionalised his research.


That research was clearly considerable and can be considered generally reliable. There is a further clue when he states that a particular workhouse casual ward was deplorable but was much improved when he visited it subsequently. No - this reads to me like Orwell was told it was rough by one of the tramps he interviewed and when he went to see it (as an investigative journalist rather than a casual) he found it was not so bad after all. Again, Chapter XXXII - notes on London slang - this is surely 'notes I made while talking to tramps on the Embankment' - isn't it?


The first half, the French half, has narrative because real life has narrative. We can be sure that Orwell lived it, more or less as described. The second half, the English material, has no such narrative. It is hard to fix on a time period or even a season when it is supposed to have happened. As reportage, it doesn't convince me. I think the clincher is that it was for Down and Out in London and Paris that Eric Blair decided to publish under a pseudonym. Why? Because he was ashamed of his artifice and knew his friends would ask questions to which there were no honest answers.


Nevertheless, the book is pretty good fun, enlivened throughout by vivid characters like Boris the aspirant head waiter in Paris and Bozo the London pavement artist. You've really got to hope they weren't made up too.
Posted by rogerwood at 15:00