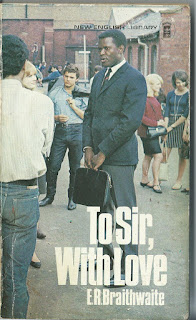 Probably best known for the 1967 film version starring Sidney Poitier, Judy Geeson and Lulu, the original book is actually set in the five years following the end of World War II. Braithwaite, a Guyanan, is a university graduate who had a successful engineering career in America. On the outbreak of war he came to the Mother Country and served with distinction in the RAF. Demobbed, he seeks work in London. With his qualifications he should walk into a well-paid job, but of course he is black, and for the first time in his life experiences colour prejudice. His account of how that felt is some of the most powerful writing in a powerful book. He is not brow-beaten, demoralised, ashamed of his race - the responses that have become stereotypical in liberal white fiction - he is bloody furious. He feels the cancer of hate boiling up.
In the end he is persuaded to try teaching. He doesn't need training thanks to his degree, and the London Council will take on all comers. Braithwaite finds himself sent to a poorly-regarded school in the East End. To his surprise, he finds an enlightened Head with a progressive programme of education and a passionate belief in the potential of his pupils. The other teachers are a mixed bag but most are behind the Head. Braithwaite finds himself in charge of the top class, boys and girls who will soon be venturing out into the world of employment and national service.
The book is as much about progressive education as it is about prejudice. A key point is that schools are a vital element of the local community. The local adults are unthinkingly prejudiced but accept Braithwaite when their children make them.
To Sir, With Love is a truly beautiful and moving book. The success of the film probably did it no favours in terms of literary repute. But Braithwaite, whom I'm delighted to learn is still among us at the age of 104, is a fine writer and deep thinker who wears his learning very lightly. He doesn't seem to have written many books, and some of them I'm guessing are scientific, but I am definitely keen to read more of his autobiographical fiction.
Posted by rogerwood at 14:47