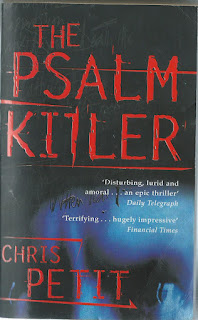 It's surprising, when you think about it -that the thirty-year 'Troubles' in Northern Ireland haven't spawned their own genre. I mean, the premise has everything - ancient blood feuds, dark deeds in ordinary streets, corruption and double-dealing on a truly epic scale. Perhaps it is still too soon. Perhaps so little of the truth is out there in the public domain that building a fiction on what little we do know seems like a hostage to fortune.
None of this, clearly, deterred Chris Petit, film maker (e.g. the cult Radio On) and occasional crime novelist. Psalm Killer came out in 1996, a year before the Northern Ireland Agreement, and is set mainly a decade earlier with flashbacks to ten years before that. It therefore covers most of the period.

The protagonist is Inspector Cross of the RUC, an Englishman married into the Ulster squirearchy. Petit thus deals with the key obstacle in writing about the Troubles - which side is right and who is the good guy. Cross is an outsider, even to the RUC. His marriage is failing and he has always been a disappointment to the in-laws. He has no real opinions about the situation.  He checks under his car for bombs every morning before leaving for the office. He investigates murders.

Our antagonist, the titular Psalm Killer, is also English, an emotionally crippled soldier who volunteered to serve deep undercover in Northern Ireland. Known only by his codename Candlestick, he first infiltrates the loyalist paramilitaries, then switches to the Republicans. He disappears, ostensibly killed, only to surface again in the mid-Eighties. Unlike Cross, Candlestick does have opinions. He is apparently killing people to draw attention to his beliefs.

This brings us to Petit's central theme, which is the corruption, institutional, moral, political, that kept the Troubles going so long that by 1995 peace seemed to be in nobody's interest. Petit has done tons of research - he provides a long bibliography with useful pointers to what the main sources discuss - and he deploys his discoveries by showing rather than telling. The problem, though, is that to show so much corruption in all its multifaceted glory requires a book of considerable length. At 635 pages in paperback, The Psalm Killer is simply too long, the story so complex that by the time of the final twist - which is a good one - I could no longer remember who the surprise person was.

So, Psalm Killer has its flaws, but there is so much quality here, so much information that no one else has revealed so effectively, that it is well worth seeking out. Petit writes well. He takes the trouble to give his characters back stories and Achilles' heels that go beyond the norm. It is a fine example of a genre that should exist but doesn't. In that sense it not only defines the genre, you could say it is the genre.

I am keen to read more. Robinson, Petit's first novel from 1993, sounds like my cup of tea,
Posted by rogerwood at 14:54