The Fall of Troy - Peter Ackroyd 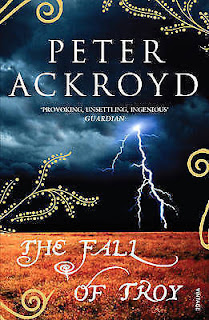 This is a typical Ackroyd confection - a novel that looks and sounds like fictionalised history but actually isn't. You begin by wondering why what is obviously Heinrich Schliemann is called Obermann. Schliemann's young Greek bride was called Sophia, as is Obermann's, albeit the former was Engastromenos whilst the latter is Chrysanthis. Obermann's backstory is the same as Schliemann's - dubious mercantile activities in Russia; a Russian wife. And, obviously, Obermann has excavated the ruins of Hissarlik and is convinced beyond the slightest doubt that he has found the city as described by Homer.

Obermann is physically very different from Schliemann. The real discover of Troy was small and weasel-faced. Obermann is big and athletic, his physical presence as powerful as his belief in Homer's historical accuracy. Schliemann divorced his Russian wife, but one of the key twists of the novel is what Obermann did with his. The big difference, though, is that Schliemann was the discoverer of Troy whereas Obermann's story is specifically the Fall of Troy. The challenges to Obermann's preconceived mental map of Troy and the Trojans spurs him to extreme reactions. As the discrepancies increase they tip Obermann over the edge into primitive, primal behaviour - the sort of behaviour that the evidence suggests the real Trojans indulged in - and thus the book becomes the Fall of Obermann, brought down by Troy.

By changing the names Ackroyd gives himself licence to elaborate on the facts and shape them to suit his story. The challengers to Obermann - the American scholar William Brand and Alexander Thornton of the British Museum - are treated as physical threats, threats to his masculinity. Obermann meets them on terms, but in the end the force of reason wins out.
The Fall of Troy is therefore a book about scholarship, about the manipulation of history, about the idea of hero. What makes it special, the best of Ackroyd's recent novels, is that he uses his themes to enhance and illuminate his characters. Sophia, for example, is the most compelling of Ackroyd's female characters that I have come across. It is she, rather than Obermann, who has stayed in my mind. This is fiction of the highest quality.


I have always been interested in Troy. The Lost Treasures of Troy by Caroline Moorhead (1994) is my favourite non-fiction account of Schleimann's great project. 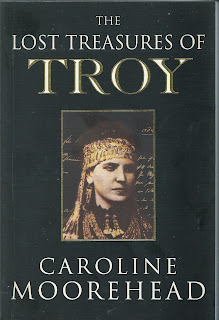 It is twenty years since I read it, so I won't review it here. Nevertheless I recommend it unreservedly. A quick internet search suggests it may now be called Lost and Found. Such are the perils of a title.
Posted by rogerwood at 15:50