A Ring of Roses - John Blackburn 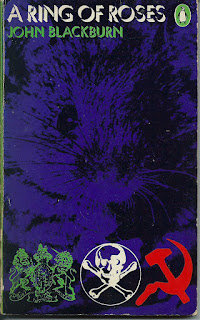 I am a massive fan of Blackburn (the author, not the town and certainly not the football team). He seems to be largely forgotten today, though I gather Valancourt have recently begun reissuing his books. In his day Blackburn was massive, and his day really was the 1960s. His world is one of rapid technical advances, generational change and the Cold War. A Ring of Roses is one such, from 1965.

No prizes for getting the reference in the title. The plague resurfaces in Berlin and the opposing superpowers have to come together to prevent a pandemic. What makes the story quintessentially Blackburn is that this is the genuine medieval plague unearthed by chance and genetically manipulated to make it resistant to the obvious cures like penicillin.

Regulars Blackburn characters reappear - General Kirk with his torn hand and Sir Marcus Levin, concentration camp survivor turned super scientist. There is dark humour - the plague-spreaders are hidden behind the names of characters from the more macabre stories of the Brothers Grimm (Iron Hans and Clever Gretel) - and whilst we are encouraged to think that a former Nazi scientist is behind the outbreak, it turns out not to be quite so simple. We get flashes of the Cold War blame game and the revelation that in 1965 a custom-built Ferrari came in just under £7000. Less of a surprise is that the British Press was as ghastly and underhand then as it is today.

John Blackburn writes thrillers with a twist. No one in his day wrote them better and I can't offhand think of anyone today. He writes simply and with pace. This Penguin greenback is 158 pages and packs in more story than contemporary thrillers dragged out to twice the length.
Posted by rogerwood at 15:41