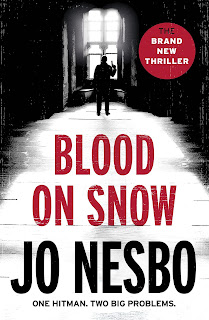 Given that Midnight Sun is billed as Blood On Snow 2, it comes as no suprise that Blood On Snow itself is the precursor of Midnight Sun - the reason Olav runs away to the deep north. The set up is ingenious, worthy of James M Cain. Olav, whose only talent is as a fixer, is ordered by his gangster boss to kill the boss's much younger wife. Olav, of course, falls for the wife, which means doing a deal with his boss's rival, the Fisherman (who ultimately pursues him to the deep north in Part 2). The twists are obvious in hindsight, but Nesbo's great gift is the ability to slide them past you, unnoticed, as you read. Olav is a much more interesting character here than in Midnight Sun - a psychopath whose heart is in the right place. It sounds bizarre but it works.

Again, a very slim volume in which irrelevant detail is pared to the bone.  I liked it better than Midnight Sun. It is not a patch on Headhunters and inferior to perhaps half the Harry Hole Oslo series.
Posted by rogerwood at 15:20