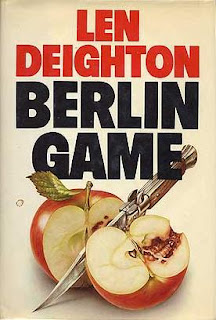 I didn't read Deighton's spy novels when they came out.  I'd been put off spy fiction by reading James Bond, which, when I reached the age of eleven or twelve, struck me as being childishly poor.  I also didn't like the movie of The Ipcress File when I was around the same age - not because it was childish but because I couldn't make head nor tail of it.  I did read Deighton's other work over the years SS-GB and XPD, for example, and I really enjoyed them.

Anyway, Berlin Game is the first in the first trilogy of the Bernard Samson series.  Samson is a mid-ranking member of the Department who is unlikely to rise higher, being neither Oxbridge educated nor ex-military.  He has, however, a skill set indispensable in the current crisis.  He was born and brought up in Berlin, where his father was stationed after the war.  He speaks Berlin German like the native he is.  The perfect candidate, then, to venture into East Berlin and extract Brahms Four, the agent who has been supplying the Department with vital economic data for years.  Also, Bernie owes the man - it was Brahms Four who saved him in Wiemar, back in the day.

It's dangerous.  Bernie's wife Fiona, who also works in the Department, doesn't want him to take the risk, especially when it becomes apparent that someone high up on the UK side is leaking to the KGB.  Finding the mole is one of the things that spurs Bernie to accept the task.  So it's back to Berlin, to his old friends, former colleagues and new enemies.

Deighton pulls the story off magnificently.  Lots of interesting characters, double-crossing and general intrigue.  The masterful laying out of detail is to my mind one of the secrets of Deighton's sixty-year success.  He portions it out just right - not laying it on with a trowel when it interests him (like Fleming) and skipping where it doesn't, but always judiciously, building our mind map brick by brick.  I read this and believed I could smell Berlin in the early Eighties.  Brilliant.