The Belly of Paris - Emile Zola 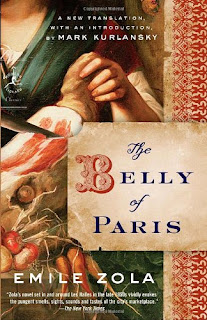 This is the Modern Library translation of Zola's shortish novel of Les Halles, the third in the Rougon-Macquart sequence.  Florent Quenu has finally returned to Paris, having escaped from Devil's Island.  He was unfairly imprisoned for a minor role in an abortive uprising.  He finds sanctuary with his brother who runs a successful charcuterie on the fringes of the newly-built market complex with his wife, the Beautiful Lisa.  Florent is ultimately found a job as inspector of the fish market where he is targeted by the Beautiful Norman, who initially only wants to spite her rival Lisa.

Meanwhile Florent has slipped back into his anti-establishment ways.  He gets subsumed (he rarely takes action) into a gaggle of local hotheads who gather at a local bar.  This draws the attention of the market busybodies and ultimately leads to disaster.

The Belly of Paris hinges on the fat and the thin.  Florent is constitutionally thin whereas Lisa is fat and complacent and conservative.  All of life is contained within the huge market, a world of its own with officials like Florent, merchants like the Norman, and an underclass which subsists on the leftover produce.  As always with Zola the world is mapped and documented.  What makes this novel different is the focus on food.  Several times key revelations are set against the preparation of food.  This is where this translation comes into its own.  Mark Kurlansky is a food writer who came into translation through his researches into international cuisine.  He knows exactly what Zola is talking about and the food sequences really glisten with fat and scent and colour.

A wonderful translation of an interesting book.  Highly recommended.