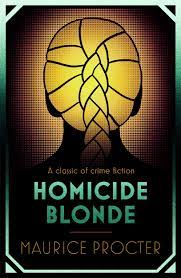 A second Murder Room reissue by my fellow Nelsonian, this one from 1965, eleven years after the first Inspector Martineau, Hell is a City, which I reviewed on this blog about a month ago.  With strong overtones of Ian Brady and Myra Hindley, a child killer is stalking the industrial quarter of Granchester.  Then it turns out that the killer is not actually picking children, he's after blondes.  A teenage woman is taken, then an older woman.  One of Martineau's murder squad coins the term 'Homicide Blonde'.

Proctor has honed his craft over the series.  He juggles two suspects, both men dominated by their mothers, both chasing the final victim.  Martineau investigates a possible ancestry clue, which is certainly different. There is a wonderful misdirection about halfway through and a savage twist at the end.  Thoroughly enjoyable and absolutely recommended.