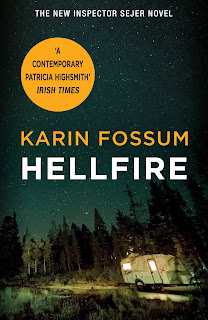 It's been a while since my last Fossum.  This instalment in her Sejer series dates from 2014 but is set ten years earlier.  Two one-parent families prepare for Christmas.  Bonnie and Simon, a care worker and her young son; and Mass and Eddie, a middleaged woman and her twenty-one year-old with mild learning difficulties.  The following summer, an horrific double murder is discovered in an abandoned caravan.  Sejer and Skarre investigate.

Fossum is very much the Ruth Rendell of Nordic Noir.  Her characters' psyches are explored in detail while the Confucian cop goes quietly about his business.  Like Rendell, Fossum never fails to draw me in, whatever her subject matter.  Hellfire is one of her best.