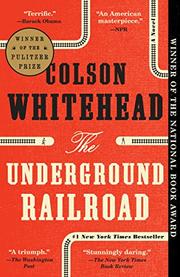 It won the Pulitzer Prize for fiction in 2017, it won the National Book Award.  It is a substantial and important novel.  Problem is, it's not that great.  It is interesting and very well-written, but apart from the one big idea (that the underground railroad was exactly that) there's nothing new or unexpected here.  The railroad conceit soon wears thin because Whitehead doesn't push himself to give it any credibility.  I, for example, would have liked other passengers.  The supposedly conflicted bad guy - the slave capturer Ridgeway, is a Clint Eastwood character in one of his lesser films.  I read it.  I won't be queuing up for any of Whitehead's other work.