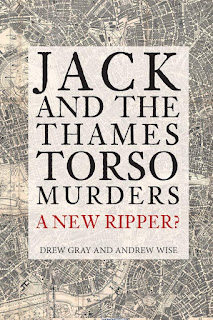 A new Ripper, the subtitle asks? A new suspect, certainly, and a lot of impressive investigation of themes rarely tackled before (the use of rail, trams and buses; the possibility that the killer worked for a firm that had cornered the market in horse butchery and had depots all over London) but for me the fundamental premise - that 'Jack' was responsible for both series of murders in London in 1888 - falls flat. It was the one thing that police and experts agreed on at the time: whoever dumped the torsos was not the same person who slashed up women on the streets of Whitechapel and Spitalfields. It strikes me, moreover, that their motives were different. For example, the torso killer was not greatly interested in the reproductive system of his victims whereas Jack seems to have been interested in nothing else.

Overall, though, this is a highly commendable addition to the field of Ripperology with a refreshing academic sub-structure. The new suspect is credible for one or the other series (more likely the torso murders), certainly lived locally and died at the right time. The last chapter alone, surveying the growth of the Ripper industry, is worth the price. The annoying thing for me is the selectivity of the sources surveyed. The old Ripper hands who co-operated with them are beyond reproach, many other significant contributors are ignored entirely. Leonard Matters, the first in the field, is dismissed because of 'errors' that are never specified. For me, too much credibility is given to geographic and psychological profiling, techniques which have rather fallen from favour since their heyday in the late 20th century. That said, any theorist really has to opt for a local or an incomer. Gray and Wise, go with the majority nowadays, and go for a local. Once you've done that, geographical profiling is always going to be a strand of your thesis.

There is, ultimately, a lot here that is new. New means of getting from A to B in and around the murder ground are brought to light. Convincing arguments are made in favour of including more victims in both series and I for one won't be satisfied until I have followed these up myself.

If you're interested in the Ripper, you have to read this.
Posted by rogerwood at 12:25