Roseanna - Maj Sjowall and Per Wahloo

They dredge Roseanna from the lake, naked and dead. The local police investigate, the murder squad from Stockholm become involved, and when they realise the dead woman is American, they get in touch with Detective Kafka stateside. 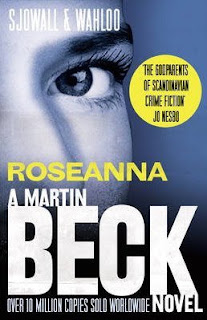 This was Sjowall and Wahloo's first collaboration, the first of their ten Martin Beck novels. In a sense it was their homage to Ed McBain, who to a great extent created the police procedural in the States; but Beck is really a unique creation, the Swedish precursor of the likes of Inspector Wexford, the ultra-realistic police procedural, the grind as well as the glamour.

It is the best of the Beck books I have read so far, mainly because it takes so many risks. I suppose they reasoned that Roseanna had to be a hit otherwise the other nine would never happen, therefore it had to stand out from the crowd. Which it certainly does. I have always been a fan of the interview typescript technique which features heavily here. But what really caught me was the progressive revelation of Roseanna as a healthy young woman living (and of course dying) on the eve of the Sixties Sexual Revolution. Indeed she dies because she is sexually liberated.

Ed McBain seems realistic because he is so fantastically stylised in his writing. Sjowall and Wahloo, in translation at any rate, are genuinely downbeat and quotidian. Their mastery is in the plotting and the gradual peeling back of the layers until the truth is revealed. As Henning Mankell puts it in his introduction to this 2006 reissue: "The book describes the fundamental virtue of the police: patience."

Nobody does it better than "the godparents of Scandinavian crime fiction" (Jo Nesbo). It may well be that Sjowall and Wahloo never did it better than in Roseanna.
Posted by rogerwood at 15:18