The Crying of Lot 49 - Thomas Pynchon 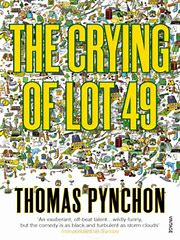 A phantasmagorical medley of paranoia, conspiracy and latent psychodelia, Pynchon's second novel appeared in 1966. It is of its time in that it references the West Coast music scene, specifically of San Francisco, that was to erupt in 1967 and the widespread use of hallucinogens. At its core it has a much deeper timeline, dating all the way back to Thirteenth Century Europe where the German princelings of Thurn und Taxis built a staggering fortune on the back of the first transnational postal service. This went underground after the Thirty Years War and now services only syndicalists and anarchists. It's that peculiarly American obsession, postal fraud, and Oedipa, trying to observe her duties as executor of the will of her onetime lover Pierce Inverarity, sees its symbol of a muted post horn everywhere. Ingeniously the Tristero post boxes are marked W.A.S.T.E.

For such a short novel, only 142 pages in this edition, there's an awful lot of story and ideas. The ending is awkward. We find out what W.A.S.T.E. stands , what Lot 47 is and how come it is crying or cried, but really you get the impression that Pynchon has simply run out of steam. It's a lot of fun, though, and I'm really pleased I finally got round to reading it.