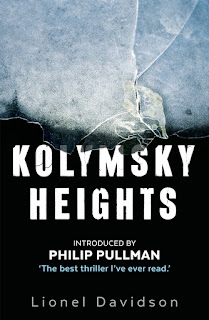 Is Kolymsky Heights the greatest thriller ever written? That is always going to be a subjective question. Objectively, though, no one can deny Davidson's immediately post-Soviet techno yarn should be in the running.

Davidson is an unusual figure. He had a forty-year career and was always successful, but he only seems to have produced eight novels, of which Kolymsky Heights is the last. I remember reading the penultimate, The Chelsea Murders, in the early Eighties, but have never even seen the others in a library or bookshop.

You can see why there was a sixteen year gap between Chelsea and Kolymsky. The amount of research must have been colossal, let alone developing a hero capable of delivering linguistically, ethnographically and physically. Davidson's novels all seem to have different heroes, which probably contributed to the lack of productivity. The thing is, I suspect he wrote constantly - there is sixteen years' worth of writing on every one of the nearly 500 pages.

Basically, odd-ball academic Porter is asked to go undercover in the vast secret area of Siberia to contact a Russian scientist who everyone thought was long dead. There is a secret in the secret lab. The secret is revealed perhaps two-thirds of the way through and is rather touching in the way it is handled. The book is about the adventure itself - getting to the secret lab and getting back out again, which effectively involves traversing the biggest country on earth both ways. There is plenty of action, a convincing love affair, and, above all, lots and lots of thrills.

Kolymsky Heights is a classic novel of its time and of its genre. Is it the greatest? Quite possibly. The other seven novels are must-reads for me.
Posted by rogerwood at 12:28