I Am Legend - Richard Matheson 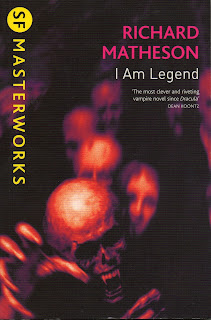 Robert Neville believes he is the last man alive after a plague turns the rest of humanity into vampires. He has lost his wife and daughter but Neville is immune to the plague, probably because of something that happened during his military service.

Neville is getting used to living alone. If it wasn't for the hubbub every night when his neighbours howl for his blood, his life would be tolerable, with his freezer stashed full of food, his store of whisky and his books. Neville is a practical man, an autodidact. He works out how the plague is transmitted, why some of the traditional weapons work better than others, and experiments with a vaccine, albeit he has no one to test it on.

Then his solitude is disturbed, first by a dog, and then by Ruth, a young widow who he forces back to his house to test for vampirism. And that's pretty much it. I Am Legend is a short book, a novella really, but Matheson still gives himself ample room to explore his subject in depth. I was particularly impressed with the bacteria theory. I also liked the fact that his characters were not stereotypes. Neville is likeable when sober, deeply unpleasant at other times. Ruth starts out as a typical immature victim but is not all that she seems. The plot is not complex but it is absolutely compelling. Matheson keeps the twists coming all the way to the end.
Posted by rogerwood at 15:09