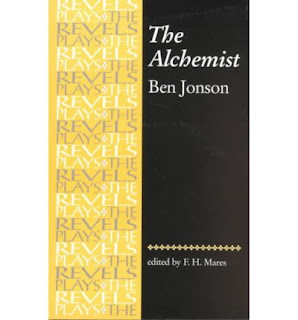 I have never really got on with Jonson. Too much allegedly clever cant for my taste. However, this Revels edition from the Manchester University Press managed to keep my attention and I really came to enjoy it. It's an academic edition so there are inevitably lots of footnotes. As an academic of drama as opposed to a student of language, I felt able to ignore these and concentrate on the key element of any farce (an element often overlooked), which is - is it funny? And by and large, yes it is. In this edition, rather than other versions I have tackled, the momentum is kept going and the unity of place and time underlined by using the French method of scene structure - that is to say, a new scene every time someone new comes onstage. The Alchemist is a play about coming and going, and Act V in particular would be hard going if it wasn't broken down into scenes. This way, the rather improbable ending becomes very funny indeed.

It is interesting how Jonson is able to do without many stage directions. Anything we need to know is referenced in the dialogue. Whilst we're at it, the dialogue is in verse and therefore metrical but Jonson uses broken meter to set up arguments and verbal interplay. I have to say I was impressed.

I was not at all impressed with the introduction by E H Mares. Mine is a vintage edition and the 'critical apparatus' as it is quaintly termed dates from 1967. The problem, I think, is that it predates meaningful theatre study in UK universities.  I was part of the first generation to be able to do all four of my degrees specifically in drama. That said, I was seeing a lot of Elizabethan and Jacobean drama in and around 1967 and I didn't come across anyone trying to do it on a proscenium stage. Certainly, no one would countenance doing it that way now. Yet Mares goes on for page after page describing how to compromise the action onto a box set. Tedious and irrelevant, as was the history of performances in butchered formats which, from Garrick on, focussed on one of the dupes, the tobacco seller Abel Drugger, rather than the con men Subtle and Face and their moll Doll Common. Still, that's the great advantage of introductions; if they don't hit their mark they are easily ignored.
Posted by rogerwood at 16:36