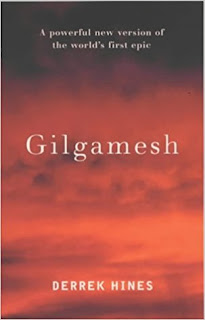 Hines is a Canadian poet who lives in Cornwall. He studied the ancient Near East at university and thus is comfortable in the world of Gilgamesh, hero of the world's oldest epic. It is worth dwelling on the age of this text and the events and people concerned. The historical Gilgamesh lived about 2800 BCE. To use a crude measure, that's half a millennium further away from the birth of Jesus than we are. The text was first written down, in the world's oldest known form of writing, about 500 years after his death. The stories in it, however, were probably circulating in oral form within living memory of his death. In short, it is incredibly - bordering on unimaginably - old. It is so old that is probably not possible to transport the modern reader into the world described. Hines's approach is not to try to. Instead, he uses modern terminology to startle us into accepting the difference of the most ancient of ancient worlds. Again, back to crude measures: we find the world of Tutankhamen alien - Gilgamesh goes back a further millennium and a half.


For an epic, Gilgamesh is surprisingly short, only 61 pages in Hines's version. Yet there is a satisfactory amount of incident. As usual the gods fall out over the humanity project. Gilgamesh is semi-divine and so full of himself. So the gods create another powerful being to set against him. This is Enkidu, the beast-man who lives and communes with the animals. Given the age of this work you have to wonder if this is some sort of race-memory of a time when there were other versions of us wandering about. Enkidu is certainly the earliest surviving instance of a wild man or, as the medieval English called them, wodwoes or green men.


Enkidu annoys the locals by freeing animals from their traps. They opt for one sure way of taming him. They hire the temple prostitute Shamhat to shag some civilisation into Enkidu. This works. Enkidu forgets the language of the animals. The scent of the harlot on him drives the animals away. So, inevitably, he turns up in Gilgamesh's city of Uruk. The two supermen wrestle. Neither can best the other so they end up blood brothers, the closest of friends, inseparable.


Together they defeat the wizard Humbaba and the bull Taurus. It dawns on the gods that they now have two overmighty humans on their hands. They debate which one to kill off. Enkidu sees this in a dream and saves them the bother. He sickens and dies; the suggestion is that he chooses to die rather than risk the gods choosing Gilgamesh.


Gilgamesh is naturally distraught. He roams the land seeking a means to be reunited with Enkidu in the netherworld. The gate-keeper goddess Shiduri suggests he approaches the ferryman Ur-shanabi, the only one allowed to cross the river of death both ways. In most versions Gilgamesh meets the Sumerian Noah - Uta-napishti - in the Underworld, who has been made immortal for surviving the Flood. The text of this meeting is a possibly a later addition - it is certainly a later discovery - and Hines does not give us Uta-napishti's account, which I find a problem. Uta-napishti is the only one who can give Gilgamesh the true price of immortality - not a blessing but a penalty paid by those who defy the gods, living death.


Overall, though, this a great version to introduce Gilgamesh to the modern reader. Overall, the use of modern language and contemporary terms works well. I loved the characterisation of Shamhat as a bar-room tart. I especially enjoyed the squaddie's account of the Humbaba campaign. Wisely, Hines keeps the most poetic, quasi-mystical passages simple and unforced. For example, when Gilgamesh laments for his dead friend:


We stood with the glow of Eden's river

still warm on our backs;

and before us the river of clay

into which men pressed our story...