When I saw that Herman Wouk was celebrating his 102nd birthday earlier this year I felt obliged to seek out his best-known work - his bestseller The Caine Mutiny (1951). 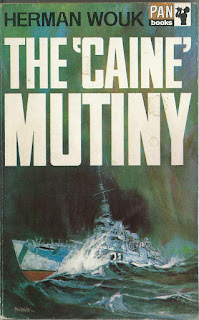 Wouk goes to great lengths to assure us that this is not a fictional account of his service during the war, which just happened to be on a minesweeper-destroyer, much like the Caine. Indeed, he certainly isn't Willie Keith, the main character through whose eyes we view the story. Wouk was ten years older, for one thing, and not born wealthy. Wouk tries to show us that the character closest to him is aspiring novelist Tom Keefer, who encourages the mutiny then gives evidence against the mutineers at their court-martial. Wouk, like Keefer, got his publisher's contract whilst serving at sea.


The truth is, Caine is not a true story - there was no ship of that name, and no mutiny - yet the power of the novel comes from its undoubted veracity.


Wouk's service informs every page. He knew exactly what it was like to serve your time aboard a floating hulk like the Caine. He knows full well it is not going to be commanded by premier quality seamen. However, he makes the point repeatedly, they are all of them willing to do their duty. For the ordinary crew it is just another job. For the handful of officers it is a berth in which to learn their craft and hopefully advance up the ranks. The new captain, Philip Francis Queeg, is just such an officer. He joined before the war and is therefore a regular navy man (unlike the wartime 'reserves' like Keith and Keefer); he has nine years' service but this is his first command.


Queeg is unpleasant. Because he knows he can never be friends with his officers, he goes overboard as a disciplinarian. He carries the rulebook to ludicrous extremes, alienating one and all. But he never crosses the line. He never goes beyond the rules. The problem which leads to the 'mutiny' (which is held by those who carry it out to be justifiably relieving the captain of command) is because he seems to be a coward in action and quite possibly deranged.


The trial takes up a huge chunk of the book - so much so that Wouk turned it into a hugely successful play in 1953. The slight downside is that, whilst Willie Keith has been charged with encouraging the mutiny, he was not even on the command deck when it happened. The trial focused on is that of Lieutenant Stephen Maryk, Queeg's executive officer, who actually seized command.


The trial and the mutiny are both truly spellbinding. The novel is long but never drags. Willie Keith is amusing enough - especially in his self-indulgent affair with the nightclub singer May Wynn - and Queeg more than crazy enough to hold our interest. Willie's coming of age and Queeg's psychological collapse are built up through incidental, wholly convincing details.


The Caine Mutiny is a war novel without equal. It does something that most others fail to do in that it spells out the price that every man pays for military service. Never mind the risk - there is little to no risk in minesweeper destroyers; the damage is psychological. Free, intelligent men are prepared to submit themselves to a rule book that is petty and oppressive because they come to realise that those in charge couldn't get them to do such mind-numbing, pointless activities any other way.
Posted by rogerwood at 16:20