He Who Fears the Wolf - Karin Fossum

I have blogged before about how poorly promoted Karin Fossum is in this country. Since Steig Larsson, anyone with so much as a vaguely Scandinavian name has been snapped up by a publisher and launched with a barrage of ads in the Press, heralding the debut of the new Nesbo. Few have made it to a second contract. But here is Fossum, already a successful series writer before the Girl even thought about getting her Dragon Tattoo and - more importantly - all the signature tropes of the best Scandi Noir: deep, dark secrets; focus on the excluded; and gruesome deaths. Yet where, other than Goodreads and here, do you see her mentioned? 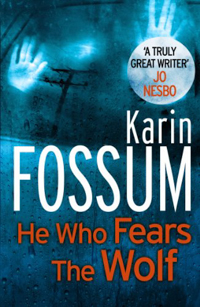 This is the second Inspector Konrad Sejer novel, first published in 1997. The cover is as uninspired as ever; I can only assume she somehow upset the art department at Vintage. Inside, however, is the best of her novels that I have so far read, and I am was already a big admirer. All the action takes place on a single day. An old lady is murdered, a bank is robbed, a hostage taken, and a chubby kid from the boy's home reports seeing the local lunatic who has escaped again. Over the course of twelve hours or so, Sejer investigates and indeed solves all. But Fossum gives equal space to the offenders and the relationship that develops between them. I won't say more for fear of giving the final twist away. It is a very good twist, worthy of Nesbo himself.