The Butchers of Berlin - Chris Petit 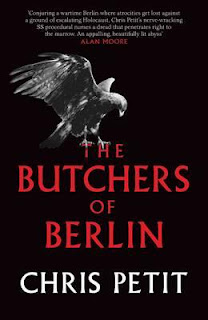 Having read Petit's 'Troubles' novel, The Psalm Killer, and rating it highly on this blog, I looked forward to reading his latest, especially given it was set in Nazi Germany, which I always find fascinating and repulsive. I am a big fan of Philip Kerr's Bernie Gunther series, particularly the ones set during the war.


I finished the book, which says something, but I did not love it. The level of research is impressive. The characterisation is hugely disappointing. I think Petit realised it during the writing, because in a sense we have two protagonists, the mummy's boy cop August and lesbian Jewish seamstress Sybil. The former is a nobody whose only distinguishing characteristic is prematurely white hair, only peremptorily explained, and the latter is a doormat, pushed hither and yon by all and sundry. The most interesting character by far is Morgen, seconded from the SS to investigate a series of murders. Morgen is enigmatic, eccentric and, plotwise, a deus ex machina, dropping in from nowhere to save the day when the boy August finds himself in trouble. Morgen is so thinly sketched that I only found out his first name when I Googled the book. The book's most memorable scene is when Morgen gets together, all too briefly, with his equally eccentric brother. They should have been the odd couple through whose eyes we explore the book. Sadly, they aren't.


The plot itself is a conspiracy of which the murders are only the surface. I should have guessed this when I saw David Peace's gushing blurb on the cover. As with Peace, the conspiracy is so abstruse that I have no idea what it is, save that it involves far too many walk-on characters. Telling us that the Third Reich was dark and depraved is not news. Making us feel the effect of this on ordinary people (as Hans Fallada does) would have been impressive. Petit doesn't, therefore The Butchers of Berlin isn't. Sorry.