Cannery Row (1945) is the distillation of Steinbeck. It contains everything he does best, in his best style and in the perfect format. Only 168 pages long in this Penguin paperback, it nevertheless manages to come across as epic in its panoramic view of the lives and aspirations of the denizens of the rundown Californian shanty town that faces onto the sardine canning factories where, from time to time, some of them might work. 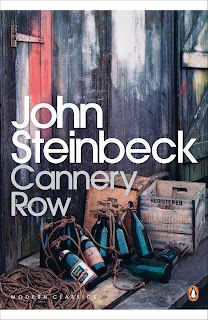 This is not the Depression of The Grapes of Wrath - there is plenty of honest work for those who want it, but the residents of Cannery Row would rather not, most of the time. Doc has his own business in among the canning factories, Western Biological, where he pickles and prepares exotic sea creatures for scientific study. Doc is our hero inasmuch as Cannery Row has one. He is involved in everything and the others are ultimately realised in their relationship to him. There's the general merchant Lee Chong, who sells Doc his beer. There's Mack and the boys who live in Lee Chong's former fish meal store, which they have refurbished as the Palace Flophouse; they just want to throw a party for Doc, to celebrate all he has done for the community. The first attempt backfires, but in the end they throw a proper party, fights and all. The girls from Dora's Bear Flag Restaurant, the local cathouse, work shifts in order to attend.


The focus slides from group to group, There is a sense of Steinbeck studying the community the same way Doc studies the life in rockpools. The wondrous descriptions of the latter - especially the baby octopus hunt - are what moved me most. Then there's the opening section which truly sets the tone, when Horace Abbeville, unable to pay his bill at Lee Chong's, settles up by making over the fish meal store to the Chinaman, then goes straight up there and shoots himself. Lee Chong has got himself a storeroom he doesn't really need; in return he makes sure Abbeville's dependents never go hungry.


That is how things work out in Cannery Row.


That is why they gave Steinbeck the Nobel Prize.
Posted by rogerwood at 14:48