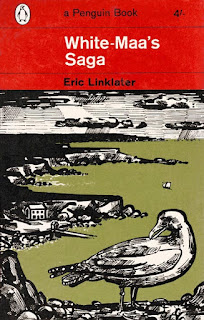 White-Maa's Saga is Linklater's first published novel. It came out in 1929 but describes events of eight or so years earlier. It reflects Linklater's own experience after the war when he went to Aberdeen University (Inverdoon here) to study medicine. Linklater was slightly younger than his alter-ego Peter Flett - he had lied about his age to enlist in 1916 whereas Peter was of full age in 1914 and served for the duration.


This student generation is not like any other. The university acknowledges the common debt to those who served and makes allowances for men like Peter when they fail their examinations. Peter fails three times but seems set to go back for more until the very end of the novel.


Between spells at Inverdoon Peter returns to Orkney where his sister Martin (yes, Martin) runs the farm Peter inherited from their parents. In both Inverdoon and Orkney Peter's main sphere of activity, when not drinking or boxing, is the pursuit of young women. There are three in the novel, nowhere near as many as the hero encounters in Juan in America, Linklater's breakthrough hit.


I'm sure the descriptions of Aberdeen's student quarter are accurate. They are amusing, too, in a studentish way. But it is Orkney, as ever, where Linklater's language takes flight. The various social strands are laid out: spinster Martin, the rambunctious Sabistons of Redland, the tinkers whose travelling seems to have been confined to the islands for several centuries, and those who work for absentee landlords, among them the villainous Isaac Skea.


The simple pleasures of the Annual Fair and an island wedding contrast with the equally ancient traditions of the university. There is no question which Linklater prefers. The climax, set in the neolithic Ring of Brodgar, is exciting and effective. Linklater, who was thirty when the book came out, came into literature with a highly effective bang. Well worth checking out - and don't let the ugly title put you off: it is actually Peter's Orcadian nickname, the dialect term for a herring-gull.
Posted by rogerwood at 17:49