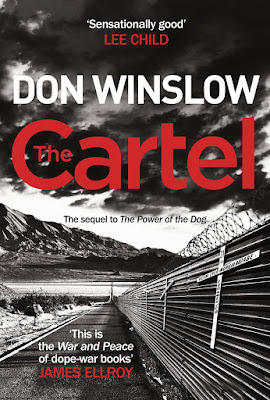 The Cartel takes up where The Power of the Dog leaves off - it is the second, conclusive round of the lifetime, life-and-death duel to the death between the DEA's Art Keller and Adan Berrera, patron of the combined cartels of Mexico.


I loved The Power of the Dog when I read it earlier this year. The Cartel is just as good, perhaps slightly better. Happily, Winslow still resists the temptation of going the full Ellroy. His world is very dark, very treacherous, and astonishingly violent, but it remains none of the main participants is actually stark staring mad. That's the point - Adan is all about business; where would the Mexican economy be without him? There's a great passage on page 514 where he says:


After the crash [of 2008] the only source of liquidity was drug money. If they shut us down it would have taken the economy on the final plunge. They had to bail out General Motors, not us. And now? Think of the billions of dollars into real estate, stocks, start-up companies. Not to mention the millions of dollars generated fighting the 'war' [on drugs] - weapons manufacture, aircraft, surveillance. Prison construction. You think business is going to let that stop?

That's the beauty and the power of Winslow. He is so on-the-razor's edge current. I gather his latest novel, The Force, is going to propel him into the major league. Even before the book comes out, the TV version is in production. Don Winslow is already pretty big. Within a year he is going to be huge. I just hope he can stay current.

Writing this post, I think I have hit upon what makes The Cartel ever so slightly better than The Power of the Dog. It's the subplot about Pablo Mora, crime reporter on the local newspaer in Juarez, the frontline of the cartel war. Pablo is lazy, submissive, but he comes through in the end. Boy, does he come through. I can't offhand think of anything recent that has moved me so deeply as his last post. For many writers that would have been the whole story. Here it is just part of the mix. Other readers will be more stirred by other storylines. The point is, every reader will find something to treasure here.

Email ThisBlogThis!Share to TwitterShare to FacebookShare to Pinterest
Labels: Adan Barrera, Art Keller, Don Winslow, Juarez, Pablo Mora, The Cartel, The Force, The Power of the Dog, US fiction, War on Drugs