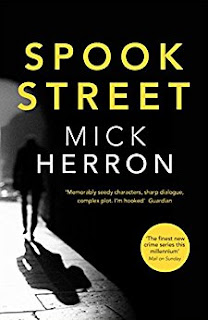 I hadn't come across Mick Herron before. Had I noticed the blurb from the Mail on Sunday I would never have picked Spook Street up, which would have been a shame because, though the Mail on Sunday has no sense or taste whatsoever, this really is an excellent, fresh take on contemporary British spy fiction.

For a start, it's sardonically comic. Jackson Lamb, our team leader, is an appalling slob. The team he leads at Slough House are known elsewhere in MI5 as 'slow horses'. They are, in short, the unmanageable ones.  They have initiated disaster at some point in their career but MI5 dare not sack them in case they go to the Press, in which case some officers who still have prospects might end up in the adjoining prison cell.

Still, even slow horses have their day. Sometimes a case arises which is inescapably their province. Here, the proper domestic spies are fully engaged with a suicide bombing in a shopping mall. River Cartwright, one of Lamb's team, goes to visit his grandfather who is suffering dementia. Only someone claiming to be River has already shown up. The old man, who is not so senile that he can't vaguely remember his own grandson, shoots him dead - because David Cartwright was once also an habitue of Spook Street, by no means a slow horse but a candidate for First Chair. Who has sent an assassin to kill him? Is the old man as gaga as he seems? And how come the assassin and the suicide bomber travelled on papers of British citizens who never existed but who were created by MI5 back in David Cartwright's day?

That is a plot that would suffice for any straightfaced spy novel. Herron is able to deliver more because his spooks are comic and to be able to laugh at or with them we have to know something of who they are. Thus Herron's misfits end up being more rounded than many leading characters in mainstream series (Spook Street is itself the fourth in a series). Drink and domestic problems are not enough to give the slow horses their edge. Thus we have Roddy Ho, deluding himself that he has a proper girlfriend; the homicidal Shirley, and J K Coe who, his colleagues conclude, is "either PTSD or a psychopath."
The bad guys are equally conflicted, equally well-drawn. The prose style is exactly right throughout and there is a twist about 80% of the way through that is as devastating as anything by the master of such things, Jo Nesbo (see, for example, the mighty Headhunters.

I hugely enjoyed Spook Street in every way - intellectually, artistically, and sheer laugh-out-loud. I'm off down the library tomorrow to hunt out more.
Posted by rogerwood at 12:39