Frank Gardner is the BBC's Security Correspondent who was shot and disabled by terrorists whilst filming in Saudi Arabia in 2004. I became interested in him after watching a documentary series in which he set off, wheelchair and all, to see the birds of paradise in Borneo. So when I saw his first novel. I had to give it a try. 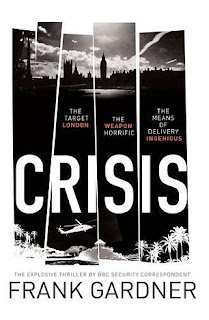 It's not his first book but it is a first novel and has some inevitable faults. His characterisation isn't great and there are scenes that don't need to be there. But it is the depth of knowledge behind the story that draws you in. The idea is a cracker: Colombian drug smugglers decide to take revenge on the Brits who disrupt their trade with a North Korean dirty bomb. Once the clock starts ticking, the device beloved of all the best thrillers, the book becomes thoroughly compelling, as good as any in the genre.


Before that things take their time. It's the inevitable compromise - you have to develop your characters and setting in sufficient detail to make your reader care about the outcome. Gardner's hero, who seems to be continuing in a second novel, is Luke Carlton, an identikit hero with an identikit name, a former Special Forces officer turned spy - which I guess must be a regular thing in real life.


Luke is a newbie at MI6 but he is the obvious man for the job because he was born and raised in Colombia (a prologue in which he loses his parents is one of the scenes I could happily dispense with). His girlfriend Elise and her subplot is a bore, but Luke suffers enough and makes sufficient gung-ho mistakes that we do come to care about his fate. The villains are pretty much the usual black hats - there is no need for them to be anything more. The most interesting characters are the officials at MI6 HQ in Vauxhall Cross (VX), especially Sayed 'Sid' Khan, the conflicted Head of Terrorism, and Luke's line manager Angela Scott.


Crisis is 550 pages. All bar about 50 of them are excellent. A very good debut but Gardner really needs to spend more time on characterisation and giving them more original names.


PS It has just dawned on me that the front cover gives away one of the plot twists. Duh!
Posted by rogerwood at 14:48