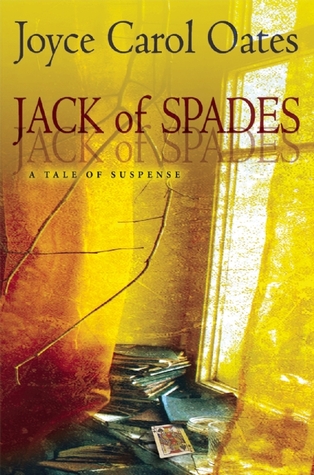 Joyce Carol Oates is a phenomenon. I remember reading one of her stories in 1973 and she's still turning out top-quality fiction today. Jack of Spades is from 2015 and is one of her clever, exciting modern horror stories. Stephen King and Dean Koontz would get 500 pages out of the same material but Oates opts for cool, compact precision below which lurk many dark and nuanced layers.


Andrew J Rush is a fifty-four year-old author. He is very successful but not quite in the league of King or Koontz or Peter Straub. Indeed he is known as 'the gentleman's Stephen King', a title he is happy to claim. Recently, though, he has developed a second literary string, publishing gory cult horror as 'Jack of Spades'. Rush fully gets the parallel with King - he even sends King copies of the Spade paperbacks. The King motif is one Oates plays with, like a cat with a spider. Much is made of the link with King's The Dark Half, which I haven't read, especially when 'Jack' starts a commentary in Andrew's head. But the real ploy is a brilliant inversion of Misery.


Andrew suddenly finds himself sued for plagiarism by a local madwoman, C W Haider. It turns out she has sued King and others on the same basis. She is old money, the last of her line, and lives in a crumbling Gothic mansion in the same New Jersey township as Rush. Part of her claim is that Rush has broken into her house and stolen her outlines and plots.


The case is thrown out, naturally. Haider collapses in some sort of fit and is temporarily hospitalised. So Rush, egged on by Jack, does what Haider claimed he had already done. He inveigles his way into her house, leaves as a present a book signed by 'Steven King' (not Stephen), and steals some of her valuable first edition books. He also finds her stash of manuscripts and sees that there really are very obvious similarities, and that Haider's work precedes his. The discovery sends him progressively off the rails. Jack of Spades is his secret alter ego, but smalltown celebrity Andrew also has other, deeper secrets that Oates cunningly holds back until the very end.


Jack of Spades is a short book - 224 pages, small format, big print - but it is completely realised. Not a word is wasted, not a line is superfluous. It's a gem.
Posted by rogerwood at 14:54