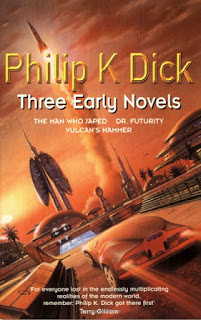 The last of the three early, short novels in this collection is Vulcan's Hammer. Is it the best? Hard to say: they are all different, all effective in their way. Is it the one I enjoyed most? To an extent. Is it the one that gave me the frisson? Easy answer. Yes it is.

Vulcan's Hammer was published in 1960, when computers filled warehouses and could barely count up to ten. Dick posits a post-apocalyptic world of about now when the world has come together in the utopian concord that everything will be fine so long as we agree to have policy determined by machines instead of men. That machine is Vulcan 3 which, spookily, occupies a facility in Switzerland not unlike CERN. In order to generate the best policy Vulcan has to be fed with every scrap of information available. Hands up who's thinking Google right now? Google's motto, Do No Evil, seemed cool to begin with, now it's morphed to ironic. Vulcan is also served by a multinational corporation. They call it Unity.

Dick accurately foresees the problem with super-super computers. There comes a time when they will replicate themselves, repair themselves, and if we stop feeding them information they will take measures to gather it for themselves. Should we be foolish enough to try and attack them, they will defend themselves. They may even fight back - which is where the hammers come in, in case you were wondering; I'm afraid they end up in their ultimate version as a prime example of an author who is halfway through his story when he realises he hasn't justified the title.

The writing is very measured for Dick, who notoriously wrote at a furious rate. The characters are very well drawn - as rounded as the protagonists in longer works such as The Man in the High Castle, written two years later and very much my kind of Dick novel. Essentially what makes the story zing is that the characters have doubts and consciences, a trait often missed in lesser SF where, of course, such things are personified as the enemy.

I have really enjoyed the three novels in this Millennium collection. I've learned quite a lot about SF signatures and tropes. I therefore recommend.
Posted by rogerwood at 12:37