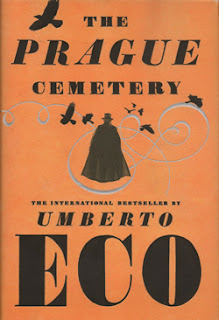 The Prague Cemetery is the sixth and penultimate novel by Umberto Eco, who died last year. It came out in 2010, thirty years after his first, The Name of the Rose. Eco the academic was fascinated by conspiracy, ritual and the interlocking or layered nature of hermetic texts. His gift was the ability to turn his obscure themes into potent literature without preaching or treating his readers as idiots. Here he uses the same materials that Dan Brown bowlderised in The Da Vinci Code. The end product is very different and for me much superior.


Eco takes a document like the notorious Protocols of the Elders of Zion. He traces its development from earlier similar texts. Everyone has always known that the Protocols are fake, yet they remain the foundation stone of twentieth century anti-Semitism. This is where the great international Jewish conspiracy sprang from. Eco asks the unasked questions: Who wrote it and why?


He gives us our fictional forger, 'Captain' Simone Simonini, an Italian living in France, who began his career forging wills in a lawyer's office. He lives in Paris because France in the 1890s is virulently anti-Semitic. He sells endless versions of the stories told by his half-crazed (real) Italian grandfather and these ultimately become the Protocols.


Simonini brings his talents to bear on many other forgeries and conspiracies, working for the French and Russian secret services. Indeed he becomes involved in every conspiracy in the Age of Conspiracies, not just Jews but Freemasons and Dreyfus and even. as a youth, Garibaldi.


This being Eco, there is a further twist. When Simonini walks the streets of Paris he is always in disguise - he wears a false beard and a wig. Is he really Simononi, we wonder? And who is the mysterious priest who seems to occupy another part of his dwelling? He obviously can't be the real priest of that name, because Simonini killed him in Sicily. He too wears a disguise. They never meet but they correspond by note - an extra textual layer. They both suffer from short term memory loss. Both wonder, are they different aspects of the same person?


The Prague Cemetery - a cemetery, it should be noted, that Simonini has never seen in a country he has never visited - is a magnificent achievement. I am interested in many of the things that fascinated Eco. I already knew some of the things revealed here. I wonder how accessible or enjoyable the book would be to someone less familiar with the topic. I also wonder, I must say, if Robert Harris came across The Prague Cemetery before writing his take on the Dreyfus affair, An Officer and a Spy. There is a passage in the Eco which could almost be a synopsis of Harris. Then again, they are working from the same, well-documented story. So - conspiracy or coincidence? How very Eco.
Posted by rogerwood at 14:36