Now this is a challenging read, worked and reworked until it resembles a palimpsest of interwoven narratives. 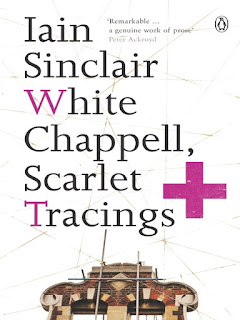 Sinclair is best known today as a psycho-geographer, exploring the effect of the deep past on contemporary cityscapes, in particular London, specifically London's East End, where he lives. When White Chappell was written in 1987 he was best known as a cutting edge modernist poet. Indeed, White Chappell combines the past and present of the author himself. It is thus a career crossroads for Sinclair.

Given the East End and the date of writing, it is no great challenge to work out what White Chappell refers to. As for Scarlet Tracings, I still have no idea. Blood trails, perhaps? Certainly that must be one interpretation. But why the medieval spelling of one and not the other...? We are not necessarily meant to know.

On one level it is about the antique book trade in the 1980s. At least one of the book scouts, Nicholas Lane, is a portrait of a real, crazed ex-rock musician who took to book dealing and who died late last year. His obituary sparked my interest in the book though I'm damned if I can find my note of his actual name. Sinclair, we must assume, is the narrator of these passages, who refers to himself as the Narrator. Here the writing is dense and poetic, almost brutalist. The seedy dealers come upon an early edition of Conan Doyle's Study in Scarlet, worth a fortune, which contains references to the Ripper murders.

The dealers do not investigate the Ripper leads, but the book does. It is established early on that Sinclair's favoured suspect is the royal physician Sir William Gull - also favoured by the legendary Stephen Knight, whose work is discussed by the dealers. To what extent Sinclair's Gull is historical, I do not know. Was he really the son of a Thames lighterman? I think we can say for sure that the way Sinclair handles his exposure and ultimate death is not historically accurate - but, wow, it is a passage that will live with me for a very long time.

Also interspersed is the story of James Hinson, a historical character who seems to have been both Gull's protege in surgery and his mentor in philosophical terms. Hinson's paganistic philosophy, available on many archival websites, is extreme to the point of derangement, but he certainly wasn't involved directly in the Ripper murders by virtue of the simple fact that he died ten years too soon. These passages are handled in letter form - letters from Hinson to his 'sister-wife' and her sister, the love of his life. Also included is a letter from Sinclair' friend and fellow poet Douglas Oliver, regarding an earlier novel, Suicide Bridge (1979), which Sinclair says is the second part of the 'triad' that closes with White Chappell, You see what I mean by palimpsest?

I know it sounds impossibly experimental but I have to say I loved it. It is absolutely up my alley in so many respects. To me, it was inspirational. I have to have more.
Posted by rogerwood at 15:34