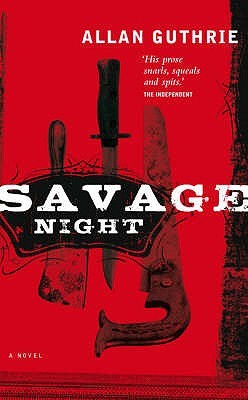 This is a creditable effort at a Tartan Noir, well-written and intricately plotted. Sadly, it doesn't quite make it. It just doesn't have the side-of-the-mouth twang of proper noir.

The plot is grim but somehow underplayed. On the face of it, Savage Night is a revenge story. Jailbird Park believes, wrongly, that ex-tobacco smuggler Tommy Savage is responsible for the gangland murder of his daughter's boyfriend's father and embarks on a complex kidnap plot to exact financial retribution. Then his own son is accidentally caught in the crosshairs, which makes things personal. We then move to a narrative of two clans trying to extinguish one another. The twist which saves some and condemns others is left-field and I quite like it. The problem is, none of the characters is nasty enough to warrant the degree of carnage. They are insufficiently distinct to warrant our emotive investment. Fatally, they all speak the same, functional, unadorned plain English. OK, this is Edinburgh rather than Glasgow, to surely there is some form of local dialect?

Anyway, it rolls along. It keeps us entertained. It is all resolved within its own terms. The problem is, it lacks a final layer of dark polish.
Posted by rogerwood at 15:29